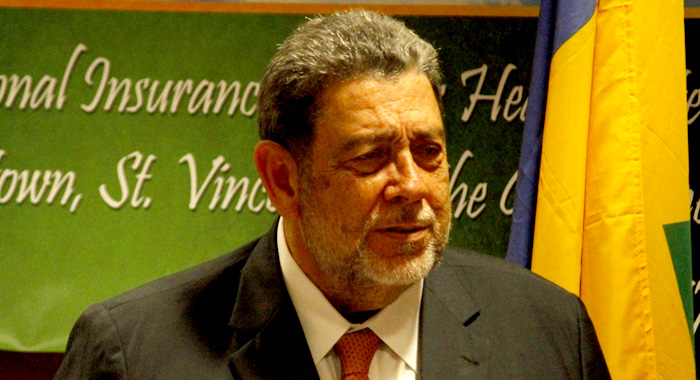 Prime Minister Ralph Gonsalves on Tuesday ignored the script he said he was given by his government’s foreign affairs officials, choosing instead to speak “sharply” at the opening of a United Nations conference in Kingstown.

“I just want to say to the Ministry of Foreign Affairs — my Ministry of Foreign affairs, please forgive me if I am not reading from the script which you gave me. I want to speak on things which I believe,” Gonsalves told the opening ceremony of a three-day meeting of the United Nations Special Committee on Decolonisation.

“I got up this morning and I prayed and I decided to speak what I am speaking about. But I am not offending anybody but I want us to set the scene as to what we have to addressed,” he told the international gathering.

The Special Committee on Decolonisation was established in 1961 by the General Assembly with the purpose of monitoring the implementation of the Declaration.

The committee annually reviews the list of territories to which the declaration is applicable and makes recommendations as to its implementation.

Using St. Vincent and the Grenadines as an example, Gonsalves said the British assumed suzerainty of the country in 1764.

He traced Britain’s legacy of genocide against the indigenous people and African slavery.

Gonsalves, who is an advocate for reparations for genocide and African slavery, said:

“I will not say that there are no legacies of the British in the decolonisation process which have not been built upon by us to strengthen our democracy, like, for instance, the rule of law, an independent public service and the notion of elections were introduced very late, but there was a full flowering.”

He, however, said the question to be determined is whether the nation couldn’t achieve those same things without genocide and African slavery “if we had stated within our autonomous development”. This is why it is important for us to remember what we are struggling against,” Gonsalves told the seminar, which is being held under the theme   “Future for decolonisation in the non-self governing territories. What are the prospects?”

The 70-year-old leader, however, said he has been around long enough to know that countries and ambassadors get involved in a lot of diplomatic speak.

“We have to get to the core of the subjects and we have to realise that we have to subject people’s views into account and let them have a say in determining who should rule them.”

Gonsalves said that he knows many times that propositions find difficulties in being fulfilled.

He said that in 1651, Thomas Hobbes wrote his famous philosophical treaties, Leviathan. Gonsalves said Hobbes said, then, something that is applicable to the seminar:

If the books on Euclidean geometry and the theorem of Pythagoras were opposed to the interest of a particular class or group, that class or group would burn all those books.

“So, whatever paper we produce, if they are shown to be within the interest of persons, they will just be ignored — not burnt, but ignored.

“And they can only be ignored against the weight of international opinion if you have coercion. And empires the world over have risen and fallen.”

He called on participants to get themselves in a condition where they do not live in history “but use history as a guide as to how we should move in the future”, adding that of all time, only the future is ours to desecrate.

“To avoid the desecration of the future, we understand the history but not live in it. If we live in it, we will have enemies which we ought not to have today,” Gonsalves said.

He spoke of the importance of dialogue in the decolonisation process, noting that even in situations where there is armed conflict, the parties have dialogue after the conflict.

“It is better to speak sharply to the truth as we understand it than to shoot sharply,” Gonsalves said.