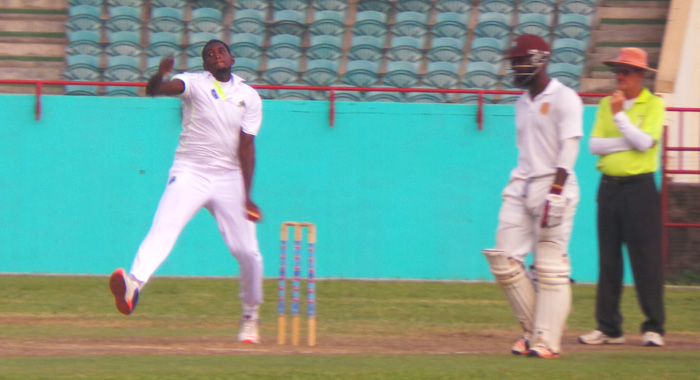 Defending National Lotteries Authority Premier Division champions, FLOW Radcliffe, once again got the better of former champions Team Rivals, when they extracted first inning points in their drawn match at the Arnos Vale Playing Field on the weekend of May 13 and 14.

FLOW Radcliffe, who won the toss and elected to bat, were dismissed for 178 in 32.4 overs in overcast conditions.

After suffering the early loss of captain Lindon James (12) with the total on 19, the champions were taken to a position of relative comfort through a second wicket partnership of 52 between the dependable Romano Pierre and the attacking Gidron Pope.

The stand was broken when Pope (37) was adjudged LBW to left-arm spinner Hooper to make the total 71/2. Pope faced 39 balls and struck 6 fours.

The departure of Pope then saw the innings head on a downward spiral as wickets began to tumble even as Pierre, who was given a few slices of luck, remained at the wicket.

It took a partnership of 36 for the ninth wicket between Pierre and Kalberth Springer (15) to push the total past the 150 mark and to the eventual 178.

Pierre (75*) remained unconquered as he carried his bat and once again displayed a technique and a temperament that seem destined for the big times. He batted 144 minutes, faced 87 balls and struck 5 fours and 2 sixes. The diminutive left-hander also faced 51 dot balls.

Hooper 5/30 continued his good form with the ball with his left-arm spin with left-arm pacer Obed McCoy getting 2/62 but from 9 overs, which included plenty of loose deliveries.

Team Rivals, missing the services of the prolific pair of Casmond Walters and Hyron Shallow who have both travelled overseas to ply their trade, looked less than comfortable in their reply against the pace of Delorn Johnson and the spinners. They were soon in trouble as opener Husani Porter (5) was at the wicket by Wayne Harper off Johnson with the total on 15. It was soon 22/2 when Hooper (15) was well caught by Pope at second slip off the impressive Johnson and at the same score Dillon Douglas (one) went as well, caught off Richie Richards. They ended the day with the further loss of Roneil Jeffrey (10) at 34/4.

On resumption on Sunday, Team Rivals, who are the current leaders of the 2017 competition, continued the struggle as they were held in check by disciplined bowling and despite some late order resistance were dismissed for 147in 40.2 overs, after being 112/8. Rasheed Frederick (28) batting at number eight was the only batsman to get into the twenties. Offspinner Richards (4/46) and Johnson (3/33) were the main wicket-takers.