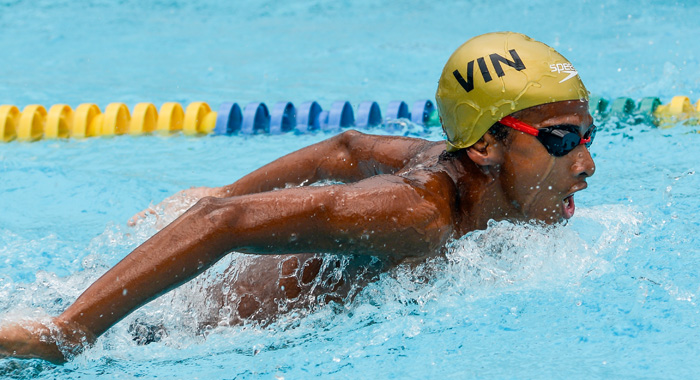 St. Vincent and the Grenadines swimmer, Alexander Joachim, won 8 gold medals and 1 silver medal when he competed in Canada on the weekend and broke national that had been set by two of his compatriots

The 14-year-old athlete was among some 380 swimmers who competed at the 2017 Thunderbolts May Grand Prix Swimming Championships held at the Canada Games Complex in Thunder Bay, Ontario, Canada from May 26 to 28.

The Grand Prix featured in excess of 380 swimmers representing 15 swim clubs from Canada and the USA.

Joachim emerged as the overall age group champion in the age 13 to 14 category.

This was Joachim’s second outing, competing at a major Canadian swimming championship.

He had great success in his previous event where he swam as a 13-year-old.

This Thunder Bay Grand Prix is his first swim competition after turning 14 years old and he swam and competed in the 13 to 14 year-old-age category.

Joachim competed in 8 individual races and as part of a relay team in two additional events.

He qualified for the finals in all of his events.

He won 7 individual medals and 2 relay medals, including 8 gold medals and 1 silver medal.

Overall swim champion in the age 13 to 14 category, amassing over 340 points.

Black Sands Swim Squad and SVG National swim coach, Kyle Dougan, said: “Alex’s performances are a terrific example for the other young developing swimmers in SVG. He shows what hard work, dedication, and discipline can achieve. Alex is a leader in the pool and we look forward to seeing him continue to improve.”