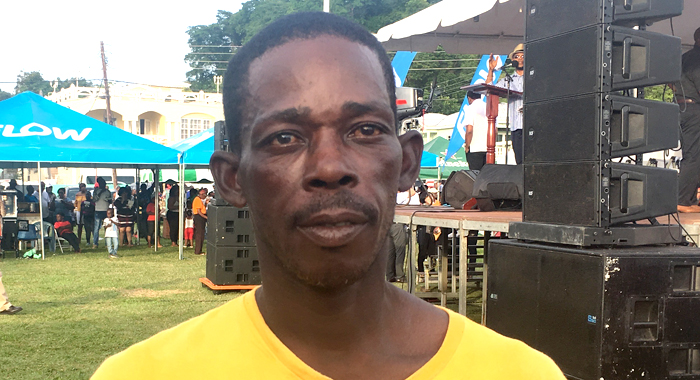 Vanrick Allick, who survived the sinking of his fishing boat a decade ago, is Fisherman of the Year. (iWN photo)

The man who won in the Fisherman of the Year competition on Monday is Vanrick Allick, a Clare Valley resident who, more than a decade ago, survived for three days at sea after his fishing boat had sunk.

The two members of Allick’s crew did not survive.

Allick’s victory on Monday came as the search continued for six Vincentians who have been missing at sea since Sunday evening.

They were on board a speedboat travelling from Canouan to Mustique, which sent out a distress call around 4:55 p.m., saying that the vessel was sinking.

The Fisherman’s Day celebrations at the Calliaqua Playing Field were scaled down in consideration of the missing persons, whose names have not been released.

Allick, 44, won the Fisherman of the Year prize after more than two decades of entering the competition.

His crew members on Monday were Kevin Grant and Tamar Jack.

The resident of Clare Valley — “the best village in the whole place, the whole of St. Vincent” — and his crew netted 462 pounds of fish on Monday to win the first prize, a 48-horsepower outboard engine.

The crew will be presented with the engine next Monday, as officials decided to postpone the prize-giving element of Monday’s event.

Allick told iWitness News that conditions were “tight” on the sea on Monday, in that when they met fish they were not biting.

He said the water was really choppy.

“Nice water we call that,” he said, adding that it is customary for them to meet fish in this type of water.

He said that they travelled some 30 miles north, after the boat, which left from the Central Leeward town of Layou, picked him up in Clare Valley, a fishing community in South Leeward.

The fisherman and captain of the boat seemed somewhat intoxicated and told iWitness News that he had been drinking in celebration of his victory, “because is first for a long time”.

He said he had, at times, placed in the competition, including coming second, but it was the first time that he was Fisherman of the Year.

Allick recounted to iWitness News the incident that claimed the life of his previous crew and resulted in his having spent three days swimming in the open ocean.

He could not recall what year the incident occurred, but said it was sometime around 2003 and 2005.

He said the crew members on the ill-fated vessel were Alphonso and Curtie Forde — both of whom were related to Allick.

“Only me one survive…” Allick said in dialect.

He said the tide “been a haul up” and the engine closed off.

With the boat dead in the water, a wave crashed into the stern of the boat, causing the boat to sink.

The incident occurred on a Sunday.

Allick told iWitness News that he told his crew to grab jugs, and they all did.

He, however, said that Forde opened the jug of gas, and the gas was floating on the water, causing Allick to get burns on his skin.

Forde was the first to die, Allick said, but did not detail how Forde met his demise.

Allick said that he and Alphonso continued to swim until the Monday morning.

While they continued swimming, Alphonso told him that he could not make it any more.

Allick said that when Alphonso, who had become exhausted, sunk under the water, he would dive and bring him back onto the surface.

However, the captain had nothing to use to tie his crew member to the jug to help to keep him at the surface of the water.

“While me a dive and dive [to rescue Alphonso], me weary, too. The last time he go down, me try go down for him; me cyar mek it (I couldn’t make it),” Allick told iWitness News.

He said that while swimming, he had been feeling for the tide, and, therefore, knew how to swim to make it to land.

Allick said he had been telling the two other men to swim with him.

He said he feels “funny” that six persons were missing at sea, adding that he knows one of the persons, who he said has a house in Chauncey, a neighbouring community to Clare Valley.

“Me feel funny because all ah we ah fisherman,” Allick said, adding that he would be glad if the six persons are rescued.

Allick was also optimistic that the persons would be rescued.

“Once them get on them life jacket, somebody could save them,” he said.

iWitness News understands that the speedboat had eight life jackets on board when it began sinking on Sunday.