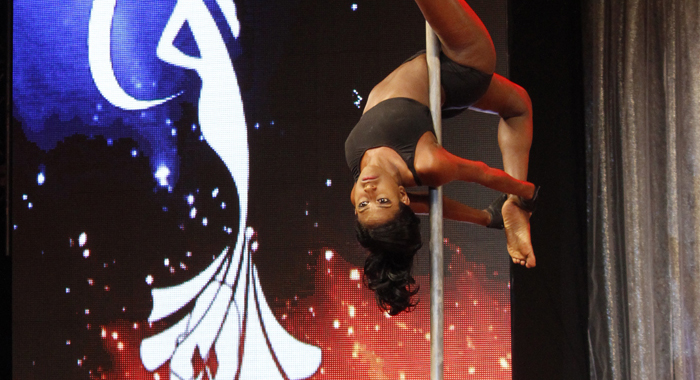 Persons who — as some social media posts suggest — criticised Miss SVG 2017, Jimelle Roberts’ talent presentation at Saturday’s show because they secretly envy her pole dancing skills, might not have to hold their grudge for very long.

The beauty queen says that she plans to open a pole dancing school in St. Vincent and the Grenadines.

Roberts, a 24-year-old teacher who holds a bachelor’s degree in English language and linguistics, defeated six other contestants to emerge Miss SVG 2017.

She bagged only one of the four categories of the show — Talent — with a pole dancing routine that highlights the plight of victims of human trafficking.

Roberts, who has been exposed to dancing since she was 3, said she started preparing for her talent presentation since January 2016, while studying in England.

“I knew that I wanted to enter the show so I figure hard work brings success. Ultimately, it paid off and here I am,” she told reporters in an interview shortly after her crowning midnight Saturday.

Asked to comment about pole dancing in light of the some of the negative comments on social media, Roberts said:

“Obviously, pole dancing has originated –we know where it originates from. However, it has now changed. Society is changing and it is actually something that is physically demanding. It takes a lot of strength and it is seen as an exercise. And, with me, I do intend to open a pole dancing school in St. Vincent and it will be the first pole dancing school here.”

Roberts is a senior member of the Arabesque Dance Company and has taken part in many dance festivals across the island, according to her biography on her Miss SVG page on Facebook.

It further said that she has received numerous medals and certificates, including Most Outstanding Duet in the 2012 KCCU National Dance Festival.

During the post-show interview, the beauty queen was reticent about the origins of pole dancing, saying, in response to a question about its origins, “I think we both know that.”

“It came from the idea of stripping, but, however, as a result [of] persons realising how demanding it is and how physically challeng[ing] it is, it is now an exercise. Internationally, it is recognised as a competition and, in fact, [the] Olympics actually considered having it in 2016.”

Among Roberts’ prizes for taking the crown on Saturday was a university scholarship, which she said she plans to use to pursue a degree in speech and language therapy.