One sister succeeds another as Miss Windward 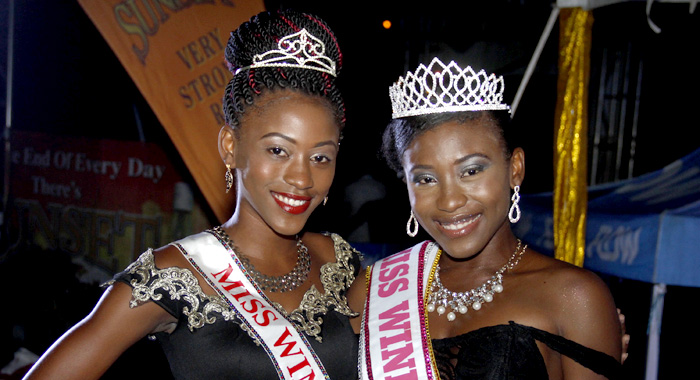 A 22-year-old Georgetown resident has succeeded her younger sister as Miss Windward.

Kimesia Bowen, 20, who won the crown in 2016, crowned her sister, Jimesia Bowen, Miss Windward 2017 at the end of the pageant Friday night at the Chili Playing Field in Georgetown.

Bowen defeated four other contenders and took the Swimwear and Eveningwear categories.

Miss Stubbs, Arielle Ollivierre, who was a crowd favourite, won the Talent and Interview segments of the show, but was adjudged Second Runner-up, having been outperformed by Miss Sandy Bay, Lourie John.

Asked how she felt about winning the crown, Bowen told iWitness News:

“I am very elated and also relieved that it’s all over, all the nerves, all the hard work, everything paid off.”

Bowen, a past student of the Girls High School and the St. Vincent Community College, is a manager at Origin’s Talent Agency.

She told iWitness News in the post-show interview that her sister had been nudging her in the direction of the pageant.

“My sister had been encouraging me since last year but I didn’t want to initially, but then I decided that I would take it on.”

“She was very hard on me. She trained me as if I was going in for the Miss SVG pageant. So I had to be on a diet and all those others stuff that the Miss SVG contestants have to go through,” Bowen told iWitness News.

She, however, said she was “not sure yet” if she has plans of entering the Miss SVG pageant.

Asked what gave her the advantage Friday night, Bowen said:

“Pageantry is really an elaborate display of beauty and intelligence, so I think tonight I gained the right to be acclaimed beautiful and intelligent.”

In her introductory appearance, which was not judged, Ollivierre mentioned the nationwide association with Stubbs and mangoes, displaying a total embrace of her community that went down well with her supporters.

In the talent segment, she used a monologue to pay homage to various artistes for their contribution to Vincy Mas, which is this year celebrating 40 years since it was changed from a pre-Lenten to a summer festival.

She ended the presentation with a wish for a safe and violence-free Vincy Mas 2017.

In addition its simplicity and almost flawless execution, what might have won the judges’ nod for the Stubbs delegate might have been her impeccable lip-syncing with the recording of herself that played while she was on stage.

In the interview segment, each contestant was asked two questions: one based on their biography and picked randomly from an envelope.

“My grandmother was an extraordinary individual. She was a teacher, a social worker and she was a role model to many women in the society. She definitely taught me to take care of children and to respect persons in the society. I practice that each and every day and I see the respect in return. That’s why my grandmother is my biggest inspiration.”

The random question that Ollivierre picked was:

“What bothers you the most about what is happening in the country today?”

Friday’s show showcased all elements of Vincy Mas, including songs from the cash of Prophet’s calypso tent, which is based in the east coast town.

There were also displays from Tribes Mas Band and renditions for South East Steel Orchestra.

Guest artistes included Shanel Nanton and the Flow Soca Dans, as well as artistes from the windward communities.