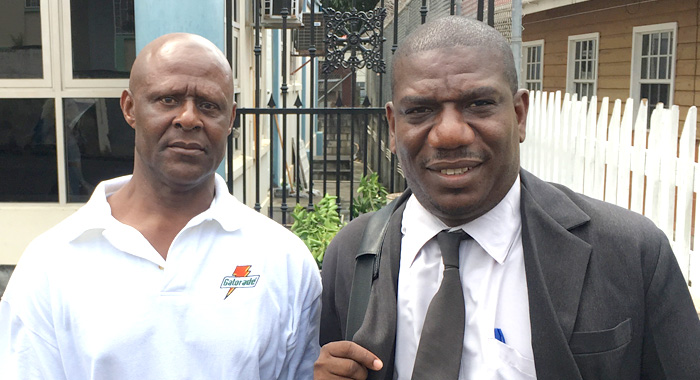 Augustus Glasgow, left, and his lawyer, Israel Bruce, after he was freed on Friday. (iWN photo)

A 63-year-old resident of Greiggs says that he will return to farming after he was freed on Friday on a murder charge, which had seen him spending the last five months behind bars.

Augustus Glasgow was freed of a murder charge in connection with the Dec. 28, 2016 death of Ralph Garrick, a 54-year-old farmer of Lowmans Windward.

Garrick died at the Milton Cato Memorial Hospital in Kingstown, one day after he reportedly fell over a retaining wall after being punched in the head during an altercation.

Glasgow was freed at the end of a preliminary inquiry that saw the Crown presenting several witnesses before the Serious Offences Court in Kingstown.

However, in what he described as an “abnormal move”, defence counsel, Israel Bruce, said that “for varying sets of legal and skilled reasons”, he did not make a submission after the persecution had presented it final witness last Wednesday.

“I simply indicated to the court I was not making a submission, that there was a sufficiency of evidence before the court and the court should make a determination based on what the court has heard and has seen,” Bruce told iWitness News.

Chief Magistrate Rechanne Browne-Matthias then adjourned the matter until Friday for a determination.

She ruled on Friday that based on the evidence presented by the prosecution, she was not satisfied that there is enough evidence to send Glasgow to stand trial before a judge and jury at the High Court.

Glasgow welcomed the court’s decision, telling iWitness News, “I feel very great because I know I was innocent.”

The farmer said that now that he is free again, he will return to the land.

“I always do agriculture, farming,” he told iWitness News.