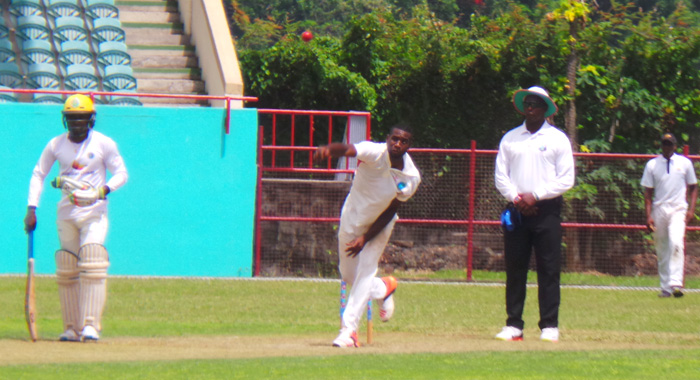 Police 2 captain Kenneth Dember (4/99) during his marathon 25-over spell.

After failing to adequately address the issue of players recruitment, former Premier Division champions, Victors 1 were given a rude awakening recently, when they were forced to suffer the ignominy of losing by default to defending champions and tournament leaders Flow Radcliffe at the Sion Hill Paying Field.

During the June 3 match, Victors could only provide six players — one less than the required seven — as per regulations, much to the chagrin of Club founder and life manager, Venold Coombs, who earlier this year has been all smiles as his team took the NLA Neil Williams T20 title at the same venue.

Opener and former Victors 1 captain, Miles Bascombe said that one player, fastbowler Shacquille Browne, had indicated that because of a persistent side strain, he was unavailable for the weekend match. But a few other players had either not offered any reason or just refused to turn up for the match.

A visibly disappointed Bascombe said that he, along with captain Donwell Hector, Ray Jordan, Kimson Dalzine, Kirton Lavia and Tshakeif Patterson, were players who had journeyed to the Sion Hill Playing Field for what was expected to have been a keenly-contested NLA Premier Division match.

Bascombe admitted that the Club, which has been in existence since the late 1970s, has not paid enough attention to recruiting young players in an aggressive manner as the other teams and, therefore, have been left with a very small pool from which to select a team.

He said that after the June 3 embarrassment, the Club would have to address the matter urgently.

Victors 1 will be further depleted with the departure of Hector, who left here on the weekend to play in the US League. Another player in allrounder Alston Bobb left earlier in the season to take part in the UK League.

Police 2, winning the toss on a green wicket, mystifyingly chose to bat and were made to regret that decision as they were dismissed for 178.

They were wholly indebted to Desron Maloney (80) who was at the wicket for 41.3 of the 44.1 overs his team batted. Maloney, who was eighth out, struck 7 fours and 1 six in his near three-hour innings and has scored 291 runs in his last three innings. Salvan Browne 27 and Kenneth Abraham 22 were the only other scores of note.

Seamer Ray Charles 5/31 and Kelon Davis 2/30 did most of the damage for Guardian General Saints.

Guardian General Saints, batting on a tricky pitch, despite half centuries from captain Sunil Ambris (53) and Romel Currency (64), looked in some bother when both of them went in the space of 9 runs to make the total 116/6-with Ambris touching a beautiful away swinger from Romario Bibby behind in the first over after lunch.

They looked in danger of losing first inning points even more at 155/8 with all of their known batsmen looking at proceedings from the discomfort of the pavilion. Police 2, however, in the eyes of those present, were forced “to lick the poison challis” when captain Kenneth Dember, their most successful bowler, chose to bowl himself most of the innings, despite the batsmen seeming to get his measure.

Pacer Darius Martin took 4/58 with another impressive display and Dember 4/99 from 25 overs for the lawmen who were read the riot act by the team management of Frankie Joseph and Meldon James when the match ended.