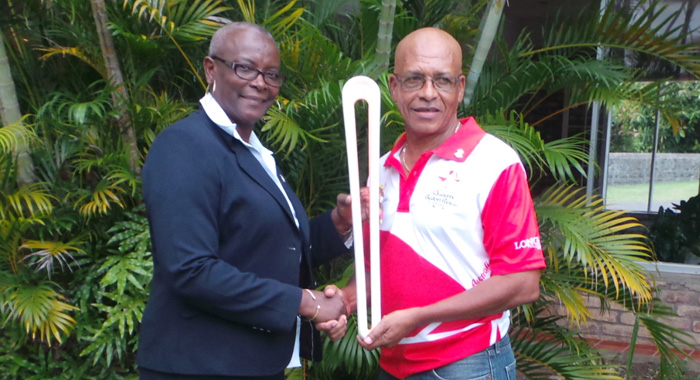 The National Olympic Committee (NOC) appears to be not among the favourite sports organisations of the government of St. Vincent and the Grenadines, according to recent revelation by the executive of the NOC.

These revelations were made during the visit earlier this month of the historical Queen’s Baton for the 2018 Commonwealth Games in Gold Coast.

The Queen’s Baton landed in St. Vincent on June 3 and was handed over to NOC chairman, Trevor Bailey by Sen. Fortuna Belrose, Minister of Culture in St. Lucia and the Commonwealth Games Federation Regional Vice-President for the Caribbean, at a welcoming event at the Grandview Hotel.

Bailey expressed his appreciation to the Commonwealth Games Federation for bringing the Baton to SVG and the Caribbean for the fourth time.

The local organising committee was forced to hold the welcoming ceremony at the Grandview Hotel after the Ministry of Foreign Affairs turned down a request for the use of the VIP Lounge at the Argyle International Airport.

The ministry said in a letter that approval for the use of the VIP Lounge was denied “in keeping with approved list of individuals entitled to use the VIP Lounge at the Argyle International Airport”.

The NOC indicated that they were not offered an explanation beyond the letter and even with a Minister of government from a neighbouring friendly country and other individuals from Australia and the UK travelling with Queen’s Baton were made to suffer what one individual said was “such a humiliation”.

Stephen Joachim, an executive member of the NOC, said the organisation should have held a press conference outside the AIA to welcome the Queen’s Baton to SVG.

In addition, to the refusal for the use of the VIP Lounge at the AIA, it was later disclosed by the NOC that their application for duty-free concession on the importation of a van to be used by the NOC in the transportation of athletes was denied by the authorities.

A spokesperson for the NOC said that all the required documentation were submitted to the Ministry of Finance, but they were still turned down.

General Secretary of the NOC, Keith Joseph, is a harsh critic of the government through his biting commentary “Just Another Look”, broadcast on Saturdays on the opposition-aligned NICE Radio.

Joachim was recently immersed in political controversy with the country’s Prime Minister after Joaichim appeared to support the opposition’s call for the government to account for how it spent the EC$700 million it has said was used to build the airport.

It has been expressed in some quarters that these may be part of the reason for the negative attitude towards the NOC.

The Queen’s Baton left SVG last Wednesday after another packed programme on Tuesday, which culminated with a reception at the Curator’s House at the Botanical Gardens. Distinguished guests, including Governor General Sir Frederick Ballantyne, and members of the media attended the event.

On Tuesday, the Queen’s Baton was taken on visits to the Kingstown Prep School, the School for Children with Special Needs, the St. Joseph’s Convent Kingstown and the St. Mary’s Roman Catholic Primary School.

The Baton was then taken to the historical Fort Charlotte for a photo shoot before departing for Central Leeward for stops at Jackson Bay in Layou, where the baton was displayed for a short period on a double skull rowboat.

The Central Leeward tour saw a short rowing journey in a double skull and the presentation of a cultural package.

On Monday, the Queen’s Baton was taken for a photo-shoot with local athletes at the Obelisk at Dorsetshire Hill, then to Montreal Gardens for another photo-shoot, with the day’s final stop coming at the Fisherman’s Day activities at Calliaqua, where it was on display for many to see.

The Queen started the countdown to the 2018 Commonwealth Games, launching the baton relay at Buckingham Palace in March this year.

She handed the baton to two-time Olympic champion cyclist Anna Meares as it started its journey to host country Australia.