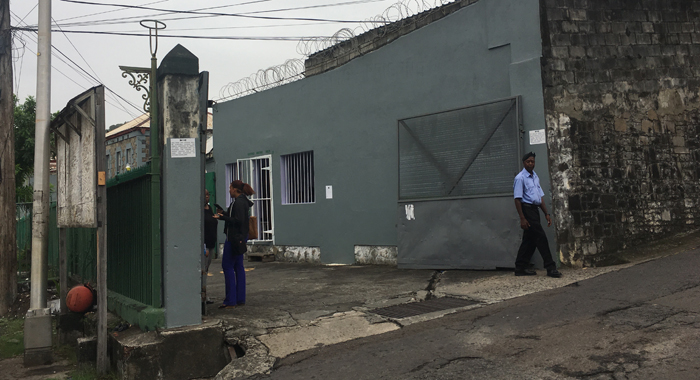 A warden, right, stands outside Her Majesty’s Prisons in June. A prisoner underwent emergency surgery after being stabbed there on Monday. (iWN photo)

Wardens at her Majesty’s Prison have been experiencing burnout after working long hours to compensate for short staffing at the correctional facility.

And Elroy Boucher, president of the Public Service Union, which represents prison wardens has noted that the situation, which has existed for at least a year, is a security concern.

“Thank God we are a peaceful country and we are not too militant like Trinidad or Barbados, otherwise, Prisons might have already been closed down for a day or two,” Boucher told a PSU press conference in Kingstown this week.

Boucher said that there are 14 vacant positions at the Prisons that are yet to be filled after more than a year.

He told the media that he is not sure how long the situation has existed but the union became aware of it about a year ago.

“When you hear workers start agitating and coming to unions, it means that something within administration is not happening and the union, therefore, [its] role is to go in and nudge the administration in the right direction,” he said.

The situation has led to prison officers working extra hours “to the extent that many of them started experiencing burnout,” Boucher said, adding that this happened although prison officers are given back the time in lieu of pay when they work extra hours.

“But no amount of time can compensate for your health,” Boucher said.

“A place like the prisons, a matter of security should be at all times fully staffed,” he further told the press conference.

The trade union leader said that Permanent Secretary in the Ministry of National Security, Godfred Pompey, has assured the union that all 14 positions will be filled before the end of this year.

“These positions will alleviate the shortfall as it relates to staffing.”

Boucher said that persons have been acting in certain positions at the Prisons for two or more years.

He said this speaks to the lawsuit that his union has brought against the Public Service Commission.

“This is unjust. It is not right, and, often times, when you have been acting for so long, you may very well hear that the position is given to somebody else,” he said.

The union is suing the Public Service Commission over what the union says is unfair promotion and a lack of transparency in promotions.

“We have asked the permanent secretary to do what has to be done to ensure that these persons who are acting are confirmed in these positions and all these vacant posts are filled.”

Boucher reiterated that the situation at the Prisons “has the potential to create a security problem.

“I think people have been filling the gap well so far,” he said, adding that the union has tried its best to have Pompey understand how grave the situation is.

“I am convinced that he has gotten the message because at one time he said he can only do that much, which means he has to ask for the posts to be released, he doesn’t have the power to release the post.  That lies with [the Ministry of] Finance…. So I know he has made the effort,” the union leader said.

Boucher said the union knows of other issues at the prisons, the majority of which have been resolved.

“So I have to credit the chief, acting — and, again, the chief has been acting for three years, which is quite interesting; it seems we have a lot of actors in this country — and the permanent secretary, they have made an effort to have the situation resolved. And, as much as they can do, I am assured by the fact that they have made that effort so to do.”

The PSU was given the assurance late last year that as soon as the funds are released, some of the issues would be addressed.

The union has pointed out to the government that the situation at the prisons is a matter of national security.