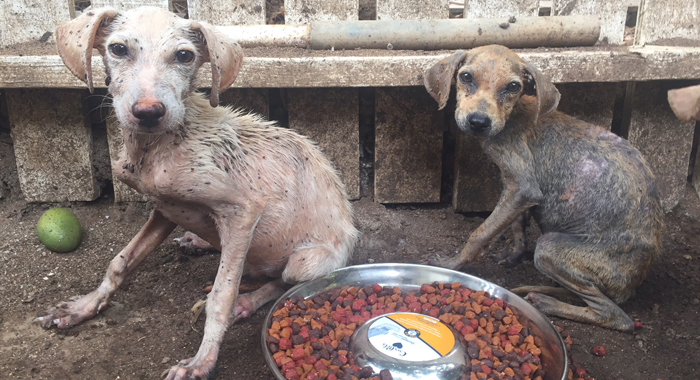 On Union Island, Southern Grenadines Animal Kindness (SGAK), a shelter devoted to helping animals in need, came across one of the saddest cases of animal cruelty and abandonment.

This story is being shared not to point fingers, but to raise awareness of the importance of getting your dogs spayed/neutered before giving them up for adoption.

In 2014, a foreign woman who had come to Union Island to set up a business adopted a puppy and she promised that it would be spayed.

Sadly, this dog was never spayed and had several sets of puppies which were randomly re-homed on the island, many of which have died or are living a rough life on the streets now, rebreeding.

Upon confrontation, this woman claimed her dog was spayed and never had puppies. Then months later admitted it did have one set of puppies. Unfortunately, the dog hasn’t had just one litter but many more.

Recently, this woman decided to leave Union Island to set up a new life on a neighbouring island. While doing so, she decided to completely abandon the animals, in a fenced and locked property with minimum food or water. She was naively trusted by all. Nobody expects a well-spoken “animal lover” to cause such pain to innocent animals.

She was sent photos of her dogs in a bad state and asked to collect her animals a week or so ago. She then claimed they were not hers, but strays. How do stray dogs find themselves into a locked property with no food or water? These pictures show their current state. It is utterly disgraceful. The stray dogs living on the streets look in a better condition than these “owned” dogs.

The female dog that was originally adopted and not spayed, has milk in her breasts. She clearly is the mother of the younger puppies and may also be pregnant again. All the smaller dogs look to be the same age, from the same litter. They are in a very poor state and have been completely neglected for much longer than imagined. You can hardly approach them. Skin conditions like this do not appear after just a few weeks. They are covered in mange and ticks.

This woman should have got her dog spayed to reduce the stray dog problem that several organisations have been fighting for in St. Vincent and the Grenadines, such as the VSPCA in St. Vincent and SGAK on Union Island. It is just adding to the stray problem and it is unacceptable, and there is no excuse for it as she had many opportunities to get her dogs/cats spayed/neutered at SGAK during the many times that we had a vet fly down for surgeries.

These dogs were starving to death, and if it weren’t for the efforts of Southern Grenadines Animal Kindness (SGAK), with police encouragement and other kind hearted persons of Union Island who have been feeding them by throwing food over the fence for the past week since finding out their situation, they would be dead already. About eight are fenced inside the property. One dog was locked in the upstairs porch, running around the house in its own faeces, trying to find a way out, losing its mind. It is very malnourished also. Three starving new-born kittens were found this week, with no mother in sight and no food.

If only there were stricter laws in St. Vincent and the Grenadines, then this sort of thing would not happen. In any other country, this woman would be prosecuted, and the dogs would be taken to get the medical help needed and be put up for immediate adoption. She would also be banned from ever having any animals.

These animals are God’s creation and we should remember that they need to be treated with respect as every other living being. No being deserves to suffer.

After a stressful week, we are grateful to say there is a happy ending and the dogs and kittens have been rescued and sent to Southern Grenadines Animal Kindness (SGAK) in Union Island, a shelter offering care, meds, food and love to abused and neglected animals. There is a still a long road to recovery and we hope they all pull through. But this isn’t the end. Once fully recovered, we must find them homes.

SGAK is a registered non-profit organisation devoted to helping animals in need. It has a facility in Union Island where a full time caregiver manages the shelter that hosts at least 20 animals at any given time. With the addition of this large group of abused animals, SGAK will have a lot of additional expenses for food, medications and treatments. It is funded by the two owners, who are residents of the island and donations from the kind-hearted. Just neutering all of them will mean a vet has to fly to Union Island and spend a full day handling the surgeries, which is costly. The starvation and abuse they have endured has depleted their immune systems, so first they need to be built up.

If you would like to donate to help these unfortunate animals, go to the “Donations” page on www.animalkindness.net. Any little amount would help and it would be very much appreciated.

One reply on “A sad tale — abandoned animals in misery”