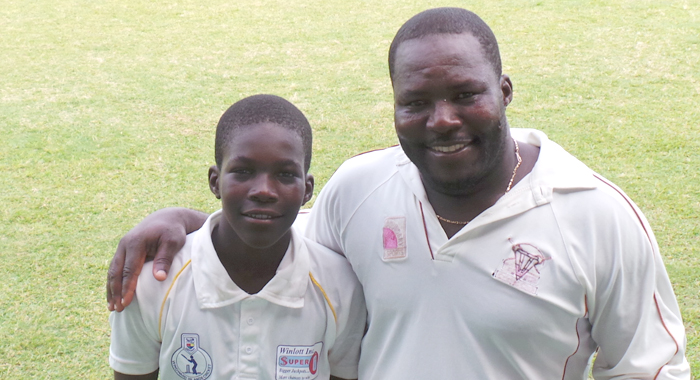 Veteran legspinner, Orlanzo Jackson, who picked up 8/32, and his son, Randy. (File photo)

Former NLA Premier Division champions, Victors 1 appear to have hit a rut, which appears to be of some concern to management and senior players.

While Victors 1 were easily ranked as one of the two top teams in the NLA Premier Division, the recent results and the performances of Guardian General Saints and Police TWO have seen them battling to be counted in the top four and a possibility of even missing out of the Super40, which is played among the top three Premier Division teams and the winners of the First Division.

Over the last two weekends the team, which once boasted more than half the senior national senior squad, have not only struggled to field a full team but have found it extremely difficult to post scores in excess of 150.

In fact, getting over 125 appears to be an uphill task for the one-time powerhouses of the division.

In their match against Team Rivals two weeks ago, not only did they allow their hold on the match to slip in the field, it was even more woeful at the crease.

In that match, Team Rivals, batting first, were in bother at 34/3 with the impressive Ray Jordan castling Husain Porter (0) and Rondel Williams (0) by the third over. A half century from captain Asif Hooper (50) saw them to 129/5. Team Rivals were then placed 177/8 but through sensible batting and some poor out-fielding by their opponents got to 290 as Roneil Jeffrey and Deighton Butler added 113 for the ninth wicket.

The big-hitting Jeffrey hit an even unbeaten hundred with 6 fours and 3 sixes, while Butler got 24.

Victors 1, in reply, found the veteran Orlanzo Jackson in unmatched form as he weaved a web of misery around their batsmen.

Jackson, who has jokingly expressed his intention to play “until I am 50”, displayed his arsenal against his opponents who just could not deal with him on a wicket offering him plenty.

He finished with the impressive figures of 8/32 from 8.4 overs with two maidens-his best figures in his 20 years of Premier division cricket — in dismissing Victors 1 for 70 in 17.4 overs. Bascombe got 24 and Obed McCoy collected 2/17.

Batting a second time after being asked to follow-on, Victors 1 were 53/1 when play was called off.

The Victors 1 batting woes continued last weekend in their match against Police 2 at the Sion Hill Playing Field, where they were shot out for 118 playing with 10 men as Atticus Browne (25) was the top score against the pace of Romario Bibby (5/32).

Victors 1, batting a second time, were 140/3 with Atticus Browne getting 83 when play was called off.