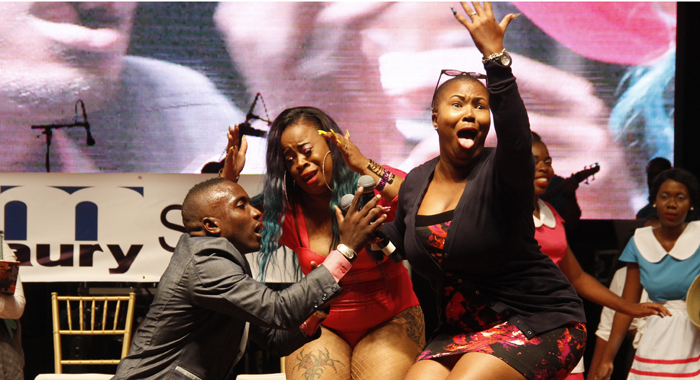 Results at a glance

When he was a junior soca artiste, Hance John dominated, winning four crowns, including a hat trick.

However, after graduating to the seniors’ level, for some reason, the door to the soca crown would not budge for him, even after years of more than just knocking.

What he needed to do the trick was a “Sugar Mami”. And, having found her, the door swung wide open for the 25-year-old artiste at Victoria Park Saturday night and he walked right in and sat down on the Ragga Soca throne, from where he will reign for the next year.

What’s more, the “Jab” he gave the door to the Power Soca throne room opened more than just a crack and would have swung wide open, but for Delroy “Fireman” Hooper and his wild crew who slammed it shut again, locking themselves in for yet another year.

In that category, Hance had to settle for second place — at least for this year.

Hance began competing around 2003 when he was a student at Evesham Primary School, the same school at which Shernelle “Skarpyon” Williams — who was second in Saturday’s Ragga Soca Monarch competition — had his genesis in calypso and soca.

And after graduating to the senior level, Hance has been banging on the Ragga Soca and Power Soca monarch doors “not only as an artiste but as a songwriter as well”.

In 2012, he wrote “Carry On” for Shaunelle McKenzie, a song that saw her placing, third.

Kamara “Keido” Foster’s “Frass”, which was third in the ragga soca competition last year, was also a Hance John composition.

But this year, Hance thinks that it was “the acceptance and the love on a different level” that did it for him and placed him on the throne.

“In terms of the acceptance and the love, people accept me for being Hance. Back then, everybody used to view me as a junior, given the many crowns that I had won,” he told iWitness News in a post-show interview.

“And this year, I stepped out of my comfort zone and [did] not sing the regular songs. I sang songs that really connect with the people, the social issues. As we know, sugar daddy, sugar mommy is a growing phenomenon, where older women are dating younger guys and so forth.”

Asked if he was speaking from experience, the artiste said, “Somewhat so, but I haven’t received any applications as yet.”

With his win, Hance unseated Chewalee Johnson, who was unable to secure one of the top spots this year with his song “Play Soca”.

This year’s winner was asked how he plans to try to ensure that that is not his fate also.

“I am very prepared. If carnival were to happen tomorrow or if it takes place tomorrow, more than likely, I would be ready, ready to defend my crown. I have a lot of songs that I have in the studio right now, mixed and mastered already just ready to be released.”

After his crowning, Hance told patrons that he was dedicating his victory to “a very special friend, Karissa Clarke”.

After the crowning as Miss SVG 2017 on June 4, Jimelle Roberts and some of her friends visited Clarke’s grave in Kingstown.

In brief comments to patrons after he was announced winner, Hance also paid tribute to the “ghetto youths”.

“… big up to all the ghetto youths; never give up on yourself, right,” he said.

Third place in the competition went to the Delroy “Fireman” Hooper — Kalid “Kavides” Walters duo, who sang “All Day”.

(Visit our Facebook Page for video clips of each artiste’s performance.)