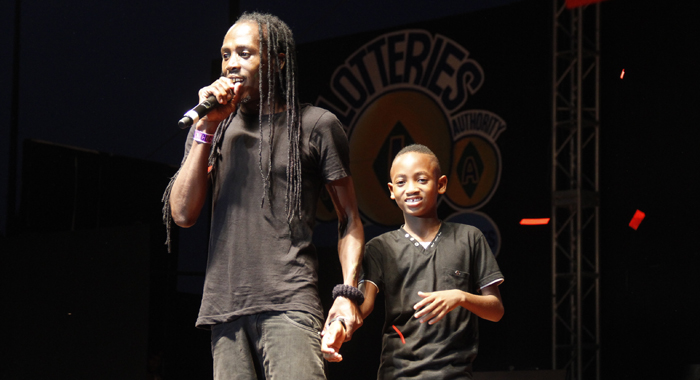 When Delroy “Fireman” Hooper on Sunday, shortly after winning his ninth Soca Monarch crown, suggested that he was about to announce his retirement, his fans had a clear message: “Don’t go!”

And if that is what he was about to announce and he wanted further confirmation of his fans’ view on it, the response was clear when he began singing, “If yo’ want Fireman one more time, put your hands in the air…”

“I’ve been coming Soca Monarch all the years and thanks to all of you. Give yourself a round of applause. I am not the greatest, you are the greatest, because my fans [are] before me.”

His 10-year-old son, Chenzhen Hooper was standing next to him, and Fireman said he had brought the youth to the show as he was performing in position number 10 and the youth was 10 years old.

Fireman paid tribute to all those who contributed to his victory, including Maxwell “Tajoe” Francis and his crew from Fancy.

The artiste sang some lines from “Wild”, the song that won him the crown and again thanked his fans for their support.

He then returned to his speech.

“So I have to think about it again,” the artiste said.

But he returned to the announcement theme again shortly after, saying, “I have an announcement to make, because I have been here for a very long time. I’ve been serving the people of St. Vincent and Grenadines….

Fireman also thanked those persons from overseas who he said come to St. Vincent each year to see him perform and those who watch via the internet.

He also thanked the DJs and radio stations, adding, “Although things go against me most of the time, but because I am a very strong man, I don’t care if you want to play, Fireman dey.”

(Visit our Facebook Page for video clips of each artiste’s performance.)