Lawyer against cop being held in prison while on remand 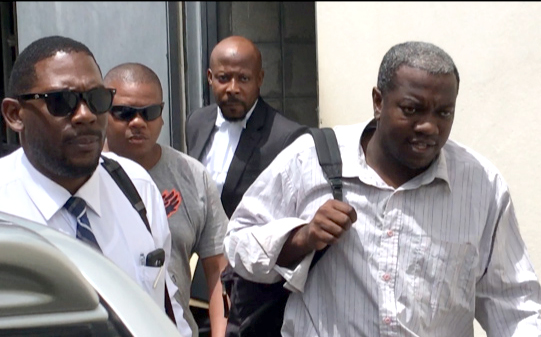 Charles, right, accompanied by Duncan, left, another detective, and his lawyer, leaves the court on Monday. (iWN photo)

Chief Magistrate Rechanne Browne-Matthias on Wednesday expressed confidence in the abilities of Detective Corporal Bion Duncan as a defence counsel asked that the safety of a police officer be ensured while on remand.

Defence Counsel Carlos James had asked that the Serious Offences Court order that Police Constable 196 Ettian Charles not be kept at the Prisons while he is remanded in custody until bail is revisited within one week — on July 19.

James said he was concerned about the security arrangements for his client, a 10-year veteran of the constabulary who has been charged with stealing EC$75,000 from the SVG Postal Corporation.

The magistrate, however, said that she would make no such order, adding that it is not the first time that a police officer is appearing before her charged with a criminal offence.

She noted that all accused persons are innocent until proven guilty, adding that she has “every confidence in “Corporal 740 Bion Duncan who will ensure the safety of the accused”.

Senior Prosecutor, Adolphus Delplesche, a former inspector of police, chimed in and asked the magistrate if she was speaking about “Sergeant Duncan” or “Inspector Duncan”.

He could have been suggesting that the detective, who has some 13 years of service, should be at a higher rank.

Duncan, who is attached to the Major Crime Unit, is lead investigator in the case and the magistrate said it is not her job to determine where the accused man is remanded.

“His name alone tell you he goes beyond,” said Delplesche, punning on Duncan’s first name, “Bion”.

Delplesche further noted that police officers have been charged more than once and the state has ensured their safety while in custody.

He further pointed out that the Mesopotamia Police Station is gazetted as a prison, but did not indicate whether his statement was an indication or suggestion that the accused police officer would be remanded there.

“I deal with police officers all the time over there,” the magistrate said, referring to the accused person’s dock.

She further said that persons who are charged are innocent until proven guilty, adding that the court will not jeopardise their reputation or safety.

Outside the court, James, who is also Deputy Speaker of the House of Assembly, also objected to his client being transported in the back of a police vehicle, saying that his he falls off, it would be a liability of the states.

He is further charged that on the same date in Kingstown, he agreed with another person that a course of conduct shall be pursued which if that agreement was carried out and in accordance with his intention would amount to an offence of burglary by the parties, contrary to Section 310 (1a) of the Criminal Code.

Charles, who lives in Glen but is originally from Coulls Hill, has been a police officer for about a decade and is attached to Beat and Patrol.