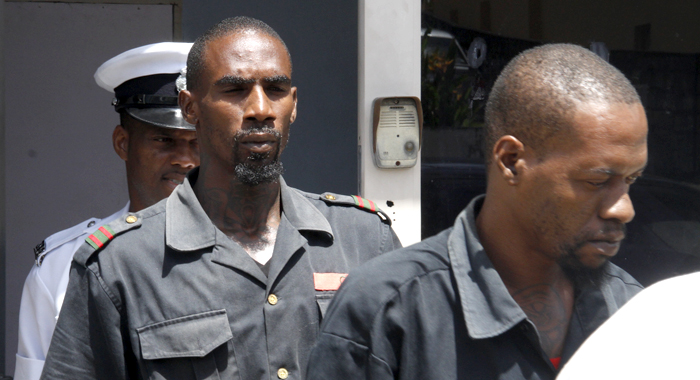 Two Bequia men who were arrested in connection with cocaine found at their home, suggested that the police officers who arrested them sell the illegal drug, saying there’s a ready market for it.

“Whay alyo nah sell them dey? Ah white man mussie come by me this morning to buy them,” McArthur Leach told police constables, Nigel John and Mohammid Lavia, while they were being processed after their Jan. 30, 2016 arrest in Port Elizabeth, Bequia for cocaine possession.

Leach was jointly charged along with Dexter Stowe of Friendship, Bequia with possession of 35 grammes of cocaine.

Stowe was also charged with possession of 13 grammes of the illegal drug.

Magistrate Bertie Pompey found the men guilty after a trial at the Kingstown Magistrate’s Court on Friday, but postponed sentencing until Monday to allow the prosecution to present Leach’s criminal record to the court.

On seeing Stowe’s rap sheet, Pompey, a former deputy police chief chuckled and said, “When you stood there, I thought you were a saint.”

Among others, Stowe has five convictions for drug possession, one for assault resulting in bodily harm and a firearm related conviction.

In his evidence, John told the court that he and Lavia were on foot patrol in Port Elizabeth when he received a report about Leach and an illegal firearm.

John told the court that he knows Leach well and he and Lavia went to Leach’s house, where they met him lying on a chair.

John, who is attached to the Rapid Response Unit, said he told Leach about the report and requested a search, but Leach objected, asking them to produce a warrant.

John said he told Leach that under the Firearms Act, a police officer does not need a warrant to conduct a search in relation to illegal firearms and ammunition, and Leach then consented to the search.

During the officer’s conversation with Leach, Stowe came out a bedroom and stood in the doorway.

Stowe removed a transparent plastic bag from his pocket and the police asked him to hand it over.

The police officers found 18 rocks of cocaine inside the bag.

During the search of the house, the police also found foil wrappings on a plate on a table containing whitish substance resembling cocaine.

The police officers told the court that when they found the substance, Leach touched Stowe and said, “Deal with that.”

Inside the bathroom of the house, the police officers also found a 6-inch wastewater pipe union with cocaine inside.

The union was stuffed with pieces of paper and also contained a black plastic bag in which the cocaine was found.

In addition to John and Lavia, Sergeant Catherine Robinson of the Narcotic Unit testified in the case, telling the court that tests of the substances found on Stowe’s person and at the house showed them to be cocaine.

Stowe did not put up much of a defence and when given a chance to present his case to the court, said, “I woulda like my lawyer to be here.”

The court had given the men several opportunities to secure legal counsel and in one instance had to issue bench warrants to get them to come to court.

“We have already gone past that stage,” the magistrate told the accused man.

“Is a lot of lie they are talking about; they never found anything like that on me,” Stowe said.

“I feel like is a set up. They keep telling lie in front the court. They know what they doing. PC John and Lavia know exactly what they did. I don’t want to waste your time,” Stowe said.

“You are not wasting my time. Trust me,” Pompey responded.

In his defence, Leech said he was “smoking a small joint” while lying on a sponge when the police came to his house sometime between 8 and 9 p.m.

His defence seems to have been that a civilian who came to the house during the search had planted the drugs there.

During John’s testimony, he told the court that the civilian came to the house during the search and they asked him to stand in the patio, “for security reasons”, until the search was completed.

But Leach said that the civilian is “a drugs man”, telling the court that the man accompanied them throughout the house during the search – even as he said he and Stowe, along with the police officers could not fit in the bathroom, as the police claim they were when the cocaine was found there.

Leach told the court that he doesn’t know what the civilian brought into the house.

He further told the court during rambling comments, “Not everything white does be cocaine.”

During cross-examination by prosecutor Station Sergeant Elgin Richards, Leach, who said he is a gardener, said he would describe himself as an honest man.

Asked what reason the police might have to lie about him, Leach said, “ Once you are a young black man, the majority of the time you are a target.  A white person would sit there and smoke, but the police would do nothing.”

Police later retrieved the gun that they had initially gone to Leach’s house to inquire about. Both men were found guilty of firearm possession in relation to the weapon and were sentenced to jail. They have appealed the sentence.