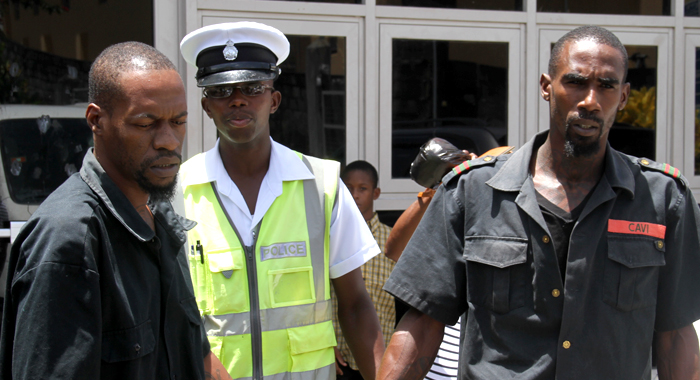 McArthur Leach, left, and Dexter Stowe will spend the next three years in prison for cocaine possession.

The Bequia man who had suggested that police sell the cocaine they had seized in a January 2016 raid on his Port Elizabeth home has been jailed.

The man, McArthur Leach, and his co-accused, Dexter Stowe, of Friendship, Bequia, were sentenced to three years imprisonment by Magistrate Bertie Pompey at the Kingstown Magistrate’s Court on Monday.

Pompey had found the men guilty during a trial on Friday but postponed sentencing to allow the Crown to present Leach’s criminal record to the court.

“Whay alyo nah sell them dey? Ah white man mussie come by me this morning to buy them,” Leach had told police constables, Nigel John and Mohammid Lavia, while they were being processed after their Jan. 30, 2016 arrest in Port Elizabeth, Bequia for cocaine possession.

Leach and Stowe were jointly charged with possession of 35 grammes of cocaine.

Stowe was also charged with possession of 13 grammes of the illegal drug.

The men were tried and found guilty in the absence of defence counsel Israel Bruce.

At the beginning of the proceedings on Monday, Bruce told the court that he looks to the court’s email to inform him of when matters in which he is involved would be heard.

He said he received no such email indicating that the matter was due for hearing on Friday.

A court clerk maintained that an email was sent about the hearing.

The defence counsel pointed out that while the court cannot be held to ransom, he knows there are other matters involving other counsel that were extended to give the counsel an opportunity to appear in court.

Bruce told the court that he did not know if the situation “had anything to do with this attorney”.

He further pointed out that his clients were also charged with firearm possession, reportedly as a consequence of the police action at Leach’s house in January 2016.

Bruce said that the alleged offences were separated, with the gun matter being heard at the Serious Offences Court, also in his absence, and his clients were being found guilty and each sentenced to six years in jail.

The lawyer further noted that the High Court had allowed an appeal in the matter and had granted bail to the accused men.

He said that based on the decision of the High Court and the circumstances of the same case, the magistrate would not be wrong to set aside his judgement so that the matter could be “properly heard; so that the defendants can be offered legal representation”.

Pompey, however, told the defence counsel that the court would not be held to ransom, adding that there is an avenue where redress can be pursued if he errs in his actions.

The magistrate then sentenced the men to three years imprisonment each.