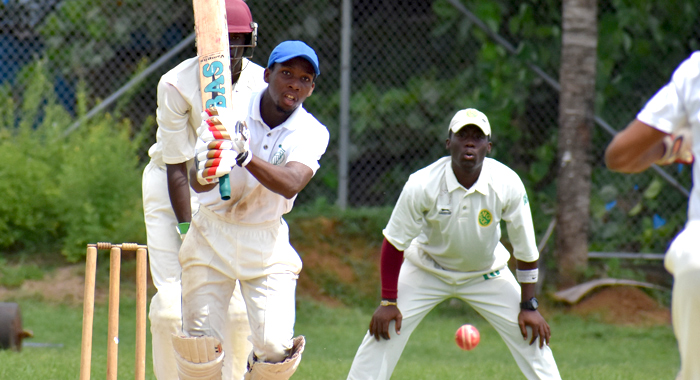 Shammon Hooper drives during his innings of 27.

The two teams set up this high-voltage showdown after securing contrasting semi-finals victories last Sunday against their opponents.

Unique Warriors earned their berth in the final by easily overcoming last year’s (2016) champions Smashers by 92 runs at the Stubbs Playing Field.

Losing the toss and asked to take first use of the wicket, Unique Warriors overcame the early loss of Ansell Hooper (0) with three runs on the board to post what turned out to be a challenging total.

The early recovery was spearheaded by Parnel “Master Nine” Browne who scored 41 in trying circumstances as he once again showed his now customary ability to assess a game. He struck one four and four sixes in his 41-ball and 56-minute stay at the wicket.

His departure and that of the prolific “Bill” Edwards then saw Unique Warriors slipped to 112/5 in the 24th over and in some strive. However, the “evergreen” Syl Vanloo found an important ally in Joelana Neil and the pair riding their luck and taking advantage of now ragged opponents added 78for the sixth wicket in 12 overs.

Christopher Campbell (24) who opened the innings and was forced to retire for a short period before returning to lay on some useful blows, in the end, saw his team to 239.

Smashers needing to chase down a target of 240 at just under five runs an over found themselves in early melee with the loss of Ronald Scott (0) off the first ball of the innings and never recovered to mount a serious challenge.

Kesworth Lewis got 39 and Rawdon Bentick, 24 but they were not good enough to repel Joelano Neil 3/9, Reginald Jeffrey 3/19 and Joseph Medford 2/46 as Smashers were dismissed for 147.

The Arnos Vale Playing Field served up a closers contest where the French Verandah SVG Community College and Providence Electronic Solutions North Leeward were separated by three wickets at the end of their contest.

SVG Community College winning the toss and batting first reached 188/ 9 in their 50 overs –a total which fell way below expectations after being 77/0 in the 12 over.

They got off to an excellent start when Alex Samuel (42) and Kody Horne (24) grabbed the early initiative with their opening partnership. However, the departure of Samuel landed the College guys in hot sauce as they lost five wickets for 22 runs to be 99/6 in the 22nd over. Romando Mars 31 and Zivon Walker (20) then added 56 for the seventh wicket but by then North Leeward who had already found solutions to their early problems and were on a roll, were able to keep the total within manageable proportion.

North Leeward’s bowling was led by the nomadic Javon “Sauce” Samuel 4/39, with Shammon Hooper 3/24 and Kentish John 2/8 giving good support. John who was responsible for corralling the innings finished with the amazing figures of 10-6-8-2

North Leeward were then indebted to Benniton Stapleton who played a blinder as they were “iffing” along despite being well ahead of the required rate of just over three and a half runs per over.

They lost Elron Lewis (12) with the total on 21 and this brought the elegant Shammon Hooper (27) in partnership with Vidal Edwards (21) to add 47 for the second wicket. The complexion of the game changed when both batsmen went with the total on 68.

It was soon 89/4 in the 14th over when the experienced Ronique Laborde (14) went which occasioned the arrival of the unheralded Stapleton.

The SVG Community College obviously overtaken by the success of their opponents’ spinners in their innings, served up a sumptuous helping to Stapleton and company. And the powerful lefthander needed no second invitation as he ate ravenously from the French Verandah menu.

His innings which was an example of “see ball hit ball” saw the ball taking off at the Airport End or dipping at the River End. In all he counted two fours and six sixes before having his leg stump dislodged with two runs needed by pacer Romano Mars who was introduced late in the piece.

Sunday’s final is expected to be a bumper affair with reports of a number of vans being expected from the North Leeward community to add some electricity to the atmosphere.