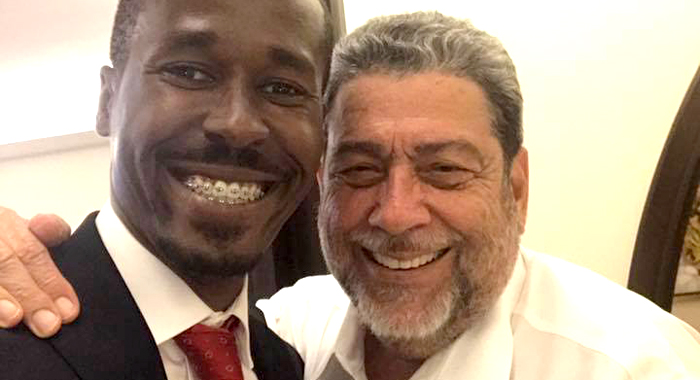 Grant has been living in Oman for several years with his Iranian wife and daughter.

He was announced this month as this country’s honorary consul to the nation that is located on the Arabian Peninsula.

But the announcement triggered criticism from some quarters, with some persons noting Grant’s apparent closeness to Gonsalves’ Unity Labour Party, and some questioning whether his appointment was reward for his contributions to the Zero Hunger Trust Fund.

“I must have someone appointed an honorary consul who wants to undermine and sabotage the government? I ask that simple question,” Gonsalves said as he commented on the development this past week.

“Deron is an accomplished young man. He started on the YES (Youth Empowerment Service) Programme here. He is very well respected in Oman. As far as I know, Deron is not a member of the Unity Labour Party, but if he were, that wouldn’t disqualify him,” Gonsalves said in a call to WE FM on Thursday.

“Look at the interest this young man is showing in so many things. The Zero Hunger Trust Fund, for instance, I notice that he gave $10,000 last year or some number close to that and he has given $5,000 this year. He came with a number of things dealing with tennis — lawn tennis.”

The Zero Hunger Trust Fund has been set up as the government pursued the goal of trying to ensure that by 2020, no Vincentian goes to bed hungry.

Gonsalves noted, however, that Grant’s appointment has not been finalised.

The prime minister said that having contributed to the Zero Hunger Trust Fund “should not be a reason to deny you. That is not the reason why.

“We are a serious government. We look at the young man and to see what is the contributions which he can make,” he said.

Correction: This article has updated to reflect in the headline the correct post to which Grant was appointed. Further, we had earlier said his wife is Omani. She is in fact Iranian.