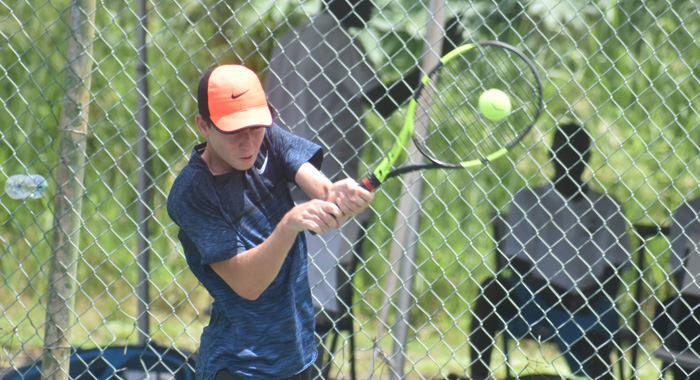 Trinidad and Tobago’s Loam Sheppard on the way to a 6-4, 6-2 win over Barbados’ Ward Trotman in day one Qualifiers.

Local Tennis fans are being given an opportunity to see who could be the next rising star on the tennis landscape.

This will have this chance as scores of young tennis hopefuls showcase their talents in the International Tennis Federation (ITF) Junior Tennis Tournament at the National Tennis Centre at Villa until Aug. 19.

The tennis hopefuls, who, by competing in this event will begin the gradual climb up the rung to possible tennis stardom, will seek motivation from the many of their predecessors who now command the world stage after walking the same path a few years before.

The United States’ Donald Young, Canada’s Milos Raconic and Germany’s Sascha Zverev are some of the players who passed through this path who are now campaigning on the professional scene.

The players will be competing in the Under 18 in both male and female with competition set to begin at 9 a.m. each day.

This year, as in the other times when SVG hosted the event, there will be no Under-14 competition.

Boyea said that following Friday’s signing-in Saturday and Sunday are the days allocated for the qualifying phase of the event.

The competition will see players facing off in the Boys and Girls Singles, as well as the Doubles.

Asked about players to keep an eye on, Boyea pointed to last year’s male winner, Blaise Bicknell, who was born in Jamaica but represents the United States.

He said Bicknell will be competing later this month in the junior category of the US Open in Flushing Meadow, New York.