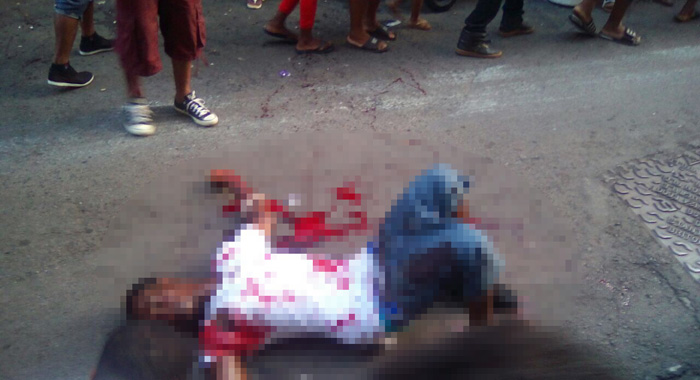 Rudolph John, who was recently released from prison, was brutally chopped in Kingstown on Friday. (iWN photo)

A man was brutally chopped in Kingstown around 5 p.m. on Friday in what police believe is the continuation of a feud that began in prison.

The injured man has been identified as Rudolph John, also known as “Butter Bread” of Glen.

John was recently released from prison, where he served a sentence for manslaughter.

He was initially charged with murder but pleaded guilty to manslaughter.

The chopping incident is said to have resulted from an altercation between John and at least one other person.

Cellphone videos and photographs show the wounded man, who was bleeding profusely, lying in the street near Prescott & Sons Ltd. on Middle Street, in the heart of Kingstown.

The images show a crowd gathered at the scene, as armed police officers responded to the crime.

The man is lifted by what appears to be two civilians and is placed in the back of a police pick-up truck and transported to the Milton Cato Memorial Hospital, located on the western end of the city.

iWitness News understands that John sustained chops wound to both of his armpits and other parts of his body.

He is said to be in a stable condition in hospital.

Police are said to have a man in custody in relation to the crime and investigations are continuing.