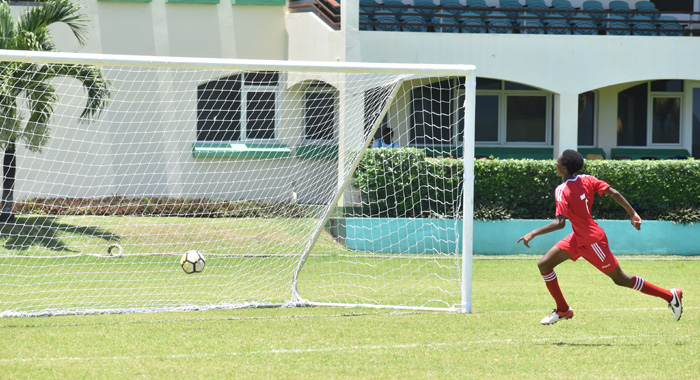 Vincentian Ronaldo Adams scored the first goal of the tournament.

Twelve-year-old Ronaldo Adams sneaked into football history when he scored the first goal in the 2017 Caribbean Children’s Charity Shield Soccer Classic organised by the Hamilton Lashley Human Development Foundation (HLHDF) and the St. Vincent and the Grenadines Football Federation (SVGFF).

This to help his team, System 3, beat Paradise of Barbados 3-1 in the U15 division on the opening day of competition, Monday, in the high-quality event hosted by SVG for the first time.

Adams, a tiny right side player, was able to scramble the ball over the line in the 12th minute as the tournament got off to great start following an impressive opening ceremony at the Arnos Vale Playing Field.

Paradise drew level just before the break when Joel Price curled a 25-yard free-kick well out of the reach of the flailing arms of the System 3 custodian.

The second half saw System 3 move into the ascendancy with more ball possession and this brought more rewards with Denzel Bascombe and Aaron Collis adding second half goals.

The match was among many that took place on the opening day following the ceremony which saw a parade of the competing teams and heard addresses from Barbados Member of Parliament, Hamilton Lashley, SVGFF President Venold Coombs and Director of Sports, Nelson Hillocks.

The event got off to a start amid some discontentment from the HLHDF, which expressed disappointment with the Government of SVG, who they say had openly refused their request for some school buses to assist with transportation.

It was said that they were told to “let the SVGFF deal with that since they had the finance to do”.

This comes mere days after Minister of Sports Ces McKie had boasted publicly about the enormous benefit the tournament was bringing to SVG.

One annoyed representative of the HLHDF said that the importance of the tournament to SVG was highlighted on Sunday night when the only flights to the Argyle International Airport were those arriving with the young footballers.

Despite the obvious problems with ground transportation, the full slate of matches was completed.

Forty-two (42) teams from Barbados, Trinidad and Tobago and SVG are registered to take part in the tournament.