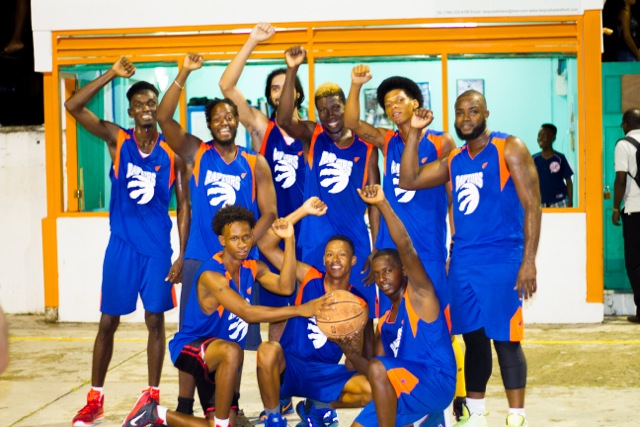 The Vita Malt Bequia Basketball 19th Tournament came to an exciting conclusion at the weekend at the Clive Tannis Hard Court in Bequia, with Raptors dominating East Blazers to capture their first ever championship in the First Division.

Rising Stars defeated Young Duke in a two-game sweep for the Second Division title, and defeated Dragons in a tough fight to emerge as the Under 16 Division Champions.

Fans came out in their numbers for the finals, despite the intermittent rain, which did not dampen their enthusiasm for basketball in Bequia, which appears to be growing by leaps and bounds. The tournament, which began on July 15, officially concluded on schedule on Sunday, now 19 consecutive years running.

President of the Basketball Association Sabrina Mitchell expressed her profound gratitude to Vita Malt and the St. Vincent Brewery for their continued support, and mentioned the important work of the “administrative team” of more than 60 volunteers who give their time during the seven-week event to ensure a successful and smooth summer competition.

She also spoke proudly, on behalf of the Bequia Association of the development and the success of the Youth Division in Bequia, with 60 registered players ages 5 to 15 — 28 of whom are playing for the first time, who not only captured the hearts of the fans with their enthusiasm and gusto, but also provide great entertainment, and a future for the sport on the island.

She thanked the parents who support their young children playing sports, and encouraged more kids to start playing at an early age. She gave her word that the association will provide uniforms to children ages 5 and over, as long as they have a desire to play in the U16 competition.

More than 60 quality trophies and 36 gold and silver medals were presented to the event winners, for both team and outstanding individual efforts. Most Valuable Player Kirstin Lampkin and teammates, the young, talented Cody Compton, and First Division Rookie of the year Camal Bess led Raptors to victory in 4 games to one of the Best of Five Final series versus veteran team East Blazers.

Lampkin was adjudged the overall MVP of the Tournament with impressive all round statistics: 101 points, 101 rebounds, 16 assists, 25 steals and 13 blocks in 6 games of the first round of competition.

Lampkin was also awarded the most rebounds and most steals in the top division, as well as MVP for his team.

East Blazers had a good start in the series, with an impressive win in Game 1 of the Best of 5, but victory eluded them once again in 2017.

East Blazers Team MVP Kelan Edwards gave a great effort, as well as point guard Michael Peniston, who was awarded the most assists trophy, with 52 in 6 first round games, but it was not enough to control the Raptors, who were on fire.

In the history of Bequia Basketball, East Blazers have been to the finals more than any other team, but have yet to win a championship.

In a highly competitive Second Division, Young Duke had to settle for runners-up, despite the talent of team MVP Donjay Peniston, the scoring prowess of Jermaine John, and dominant shot blocker Michael Peniston, who had an impressive 46 blocks in 6 first round games (two players of the same name).

Young Duke were unable to defeat Coach Tauran Ollivierre’s Rising Stars and the sparkling Nicholas Lewis, who defeated them in two straight games in the Best of 3 Series.

The young Nicholas Lewis dominated the awards, receiving 5 individual awards, including Team MVP for Rising Stars, the most points, most rebounds and most steals (118, 80 and 38), as well as the Most Valuable Player Overall in this Division.

Nicholas, and most players in the Second Division have played for over five years, having matriculated from the Under-16 division, where they started, and surely a testimony to the sustainability of the game in Bequia. Blazing Heat took the third position this year, and were eliminated in the knock out round, but the efforts of Heats’ Jovian Derrick were recognised, being awarded the most improved player in 2017 as well as having the most assists, with 39 in 6 first round games.

The Under 16 Division was an excellent competition this year, with evenly matched teams and competitive, highly entertaining games. Hawks and their Coach Keithroy Lavia emerge as this division’s champions, but had to fight for their win, having being defeated by Dragons by 1 point — 22 to 21 — in Game 1 of the Best of 3 series.

Hawks’ Daren John took his team to victory and was awarded for his efforts; he was adjudged his team’s MVP, the final series MVP, and the most points award, with 115 in 5 games.

Dragons’ Giovanni Miller was adjudged his team’s MVP, leading the scoring in all 3 games.

Team Young Wizards finished 4th in the first round, yet Wizards’ Chad James dominated the individual U16 trophies, receiving 4: his team MVP, most rebounds, most steals and most blocks with 93, 39 and 28 respectively.

The Third Place Rockets team MVP was awarded to Elton Wilson, while Hornets’ Jerez Joseph and Titans’ Elton Wilson had their efforts acknowledged, each awarded their team MVP, despite their 5th and 6th place finish of their teams in the standings.

The 20th anniversary tournament is scheduled for July 2018.