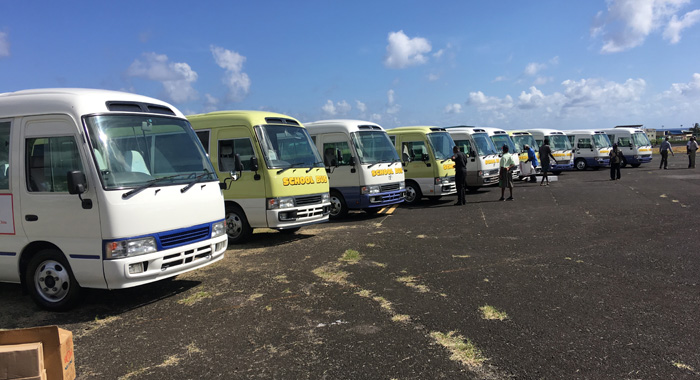 Taiwan paid for eight of the 10 school buses. (iWN photo)

The government on Monday outlined the strict conditions under which it will lease to private operators the 10 second-hand school buses that it recently purchased.

Eight of the buses were bought with a US$300,000 donation from Taiwan and the government paid for the other two.

Speaking Monday at a ceremony in Arnos Vale where Taiwan’s Vice-Minister of Foreign Affairs, Der-li Liu handed over the buses to the government, Minister of Transport, Sen. Julian Francis, said that his ministry intends to monitor the buses closely.

He said the government would pay the first third party comprehensive insurance premium and licence costs for the buses.

The buses will be leased over a five-year period, at the end of which the operators will have the option of purchasing them.

Some 47 persons have applied for the leases, and the applicants will be eliminated via an interview process.

However, the lessees will not be issued a contract.

Maintenance of the buses is the responsibility of the lessees, but the government will provide three general inspections free of charge annually.

The lessees will also be responsible for the annual licence and insurance of the buses.

The driver of the bus must be older than 30 years, Francis said.

If the driver is older than 60 years old, he or she will be required to do a medical examination.

The transport minister further said that the lessee will not be permitted to install any additional sound equipment in the bus.

Some of the buses arrived with a light tint.

Francis said that parents should be able to see their children inside the buses.

Lessees will not be permitted to wrap the buses in advertisements.

In St. Vincent and the Grenadines, the law says that two children under the age of 11 count as one adult when travelling on an omnibus.

The government is negotiating a fleet insurance price for the buses, but the individual policies will be in the names of the lessees.

Each bus must have a conductor, not only to collect money but also to ensure that passengers do not damage the vehicles.

The conductor could be between ages 21 and 50 years old.

Five times each year, the lessees must make the bus available to the government to transport students: three times during the summer vacation, once at Easter and once at Christmas.

Francis said that while the buses must transport students during school times, they can be used to transport other fare-paying passengers at other times of the day.

He said that the government has identified 10 routes where additional transportation for students is needed.

The minister said that this does not mean that the sole applicant for a particular route would be granted a lease.

If the ministry deems that applicant unsuitable, another application for a different route would be asked to fill in.

Francis said that the government has purchased the buses to respond to the issue of students having to wait long hours after school while omnibuses transport adults, who pay the full fare.

“With these buses, kids come first, other passengers come second,” the minister said.

He said that early in the administration of the Unity Labour Party, which came to office in 2001, Taiwan donated five brand new buses to the government.

He said that some of these buses are still operational.

Francis said that while the buses this time are not new ones, the government will take equally good care of them.