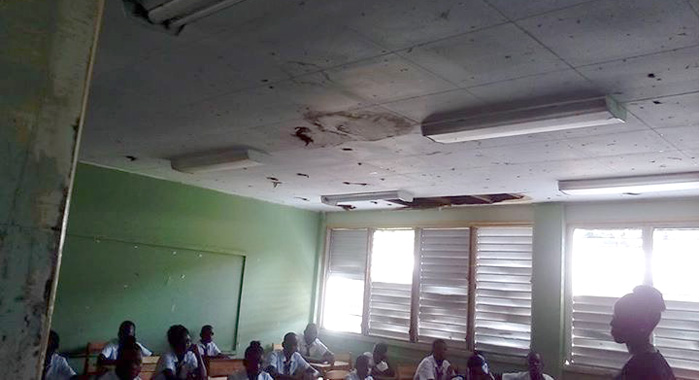 Students sit in a mouldy classroom at Bethel High School during orientation on Thursday.

The mother of a first-year student at the Campden Park Secondary School says she refused to take a tour of the facility on orientation day, Thursday, because of the condition at the school, three days before the new school year begins.

Kedean Baptiste of Lowmans Hill (Leeward) told iWitness News that she was surprised to see mouldy ceiling and a leaking roof at the school, commonly called Bethel High School.

“I don’t feel pleased,” she told iWitness News in a telephone interview after she posted photographs to the social networking website, Facebook.

“That is just one section,” Baptiste told iWitness News, adding that she refused to take the tour of the school after she saw the conditions there.

“It is in a poor state and I don’t feel comfortable sending my daughter there,” Baptiste said, adding that she will talk to the principal about the situation.

The mother said that things were hectic at the school on Thursday, but she spoke to a teacher who said she would try to return and clean up her classroom “and see what can be done for the students” before the school term begins on Monday.

Baptiste told iWitness News that “most of the windows are gone” at the school, adding that she saw a “back door” from which all of the glass if broken.

She said that she saw water dripping from the roof next to where a teacher was standing to meet persons on the tour.

The mother said there was also no glass in the windows of the room where the teacher was.

The corridors are mossy and a section of the ceiling is mouldy and falling apart, Baptiste told iWitness News.

She further said that there are several rooms with missing bulbs.

The mother told iWitness News that if the school is not clean up in time for the beginning of the new academic year on Monday, she would keep her child at home.

The conditions at the school exist even as the government is in the midst of a school repair programme.

On Monday, Minister of Works, Sen. Julian Francis detailed to a press conference some of the works to be undertaken under the programme.

But some persons have noted that while students were at home for about two months, repairs on school have begun shortly before the school year begins.