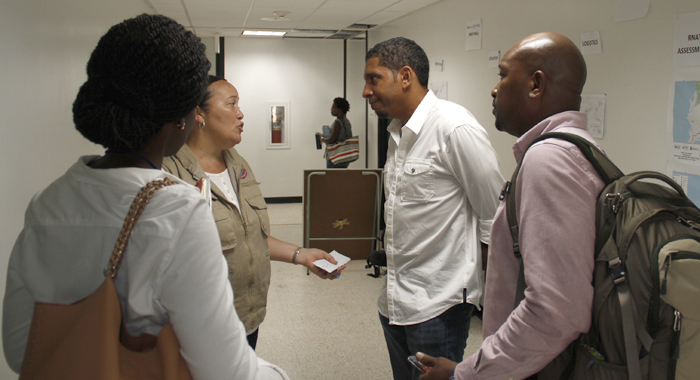 Agriculture Minister Saboto Caesar, who along with Minister of Economic Planning, Camillo Gonsalves, Wednesday visited the BVI, told the Caribbean Media Corporation (CMC) that they were here to do critical assessments of the circumstances affecting their Vincentians.

About 10 per cent of the 30,000 residents of the BVI are nationals of St. Vincent and the Grenadines and some of them have lived in the British Overseas Territory more than three decades.

Caesar said that the Ralph Gonsalves government is particularly concerned about the education of the children, especially since Premier, D. Orlando Smith, informed the delegation that it could take some time for school to reopen.

“It is going to be a bit more time and we will converse with the parents and see what is really best in the circumstances for the students,” said Caesar whose delegation was scheduled to meet with Vincentians on Tortola and Virgin Gorda.

An estimated 351 people are being accommodated in 10 temporary shelters throughout the BVI and prior to impact, 106 of them were evacuated from Anegada, another island in the archipelago.

Preliminary assessments indicate that 60 to 80 per cent of the buildings in the BVI are damaged or destroyed with a large percentage of the building roofs being severely compromised.

Electricity generation, transmission and distribution infrastructure has been severely damaged and electricity is only being provided through generators.

Caesar told CMC that he is aware that a lot of Vincentian parents in the BVI will be very occupied in the reconstruction process and it is going to be very difficult to sustain the welfare and the well-being of children at home if they are not in school.

“So I see that, in appropriate measure, we may have to accept more students at home,” Caesar said.

He said a number of Vincentians in the BVI have contacted the Ministry of education in St. Vincent and the Grenadines to inquire about the transfer of their students.

Gonsalves told CMC that Kingstown has to ensure that whatever it does is in the best interest of the individuals.

“So we don’t want to make blanket commitments at this point. We want to do an evaluation,” he said, adding that Kingstown was heartened to know that most of the Vincentians want to stay in the BVI and rebuild.

“We want to do that assessment and approach it in a systematic, structured manner with some data. We don’t want to make blanket statements. We want to have some formal decision making and that’s why we are here,” Gonsalves added.

The ministers’ comments came one day after Vincent Whatley, a senior official of the BVI government with responsibilities for Virgin Gorda, Jos Van Dyke, and Anegada, suggested that non-nationals who cannot find work should leave the territory.

He said that arrival in the BVI on Wednesday, he asked members of the team to make an assessment at the airport regarding the persons who were queuing up to leave and he was heartened that Vincentians are not among them.

Gonsalves said that most Vincentians have been significantly affected by the storm but want to stay to help in the recovery process.

“BVI has been kind to the people of St. Vincent and the Grenadines and we see that as an opportunity to repay that kindness,” he said.

The authorities in St. Vincent said that a boat will leave Kingstown on Friday to take supplies for nationals in the BVI. It will also make a stop in St. Lucia before arriving here four days later.