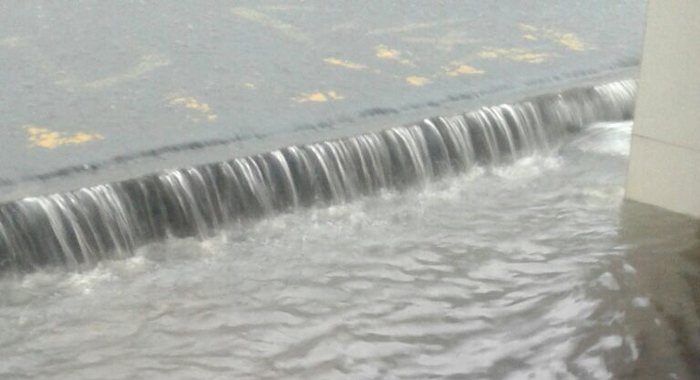 Flooding in Kingstown during a recent rainstorm. (iWN photo)

The Ministry of Education has ordered that all schools across St. Vincent and the Grenadines (SVG) be closed today, Tuesday, Sept. 19 as the flood warning for the country was extended to midday.

The advisory extends a decision made Monday and extended to Tuesday for all students who travel by boat to remain at home.

A tropical storm watch remains in effect for SVG as Maria, a category 4 hurricane continued to affect the region, having hit Dominica overnight.

A tropical storm watch means that tropical storm conditions are possible within the watch area, and heavy rains and isolated thunderstorms have pounded SVG since Monday evening.

Forecasters are urging persons near rivers, streams and areas prone to flooding and land slippage to take precautions.

Seasswells across SVG are expected to be at least 4- 6 metres (13ft-20ft), with life-threatening surf and rip current.

Small craft operators are advised to remain in port and sea bathers and other users of the sea are strongly advised to stay out of the water.

Feeder bands from the southern side of Hurricane Maria continue to generate pockets of moderate to heavy showers, periods of rain, thunderstorms and gusty winds across the islands of Saint Vincent and the Grenadines.

The SVG Metrological Services says that sustained westerly wind speed of 20 – 35 mph (32 – 56km/h) with higher gusts can be expected.

Rainfall accumulations of 3-5 inches (75-125 mm) are possible, with higher amounts in mountainous areas.

The flood warning has been extended until 12 noon today, Tuesday.

Maximum sustained winds are near 155mph (250km/h) with higher gusts but some fluctuations in intensity are likely during the next day or two.

Maria is forecast to remain an extremely dangerous category 4 or 5 hurricane while it approaches the Virgin Islands and Puerto Rico today — just two weeks after category 5 Hurricane Irma devastated the British Virgin Islands, leaving four persons dead and 60-80 per cent of the building so damaged that they cannot be used immediately.

The system is moving west-northwest near 9 mph (15 km/h) and this motion is expected to continue through Tuesday into Wednesday.