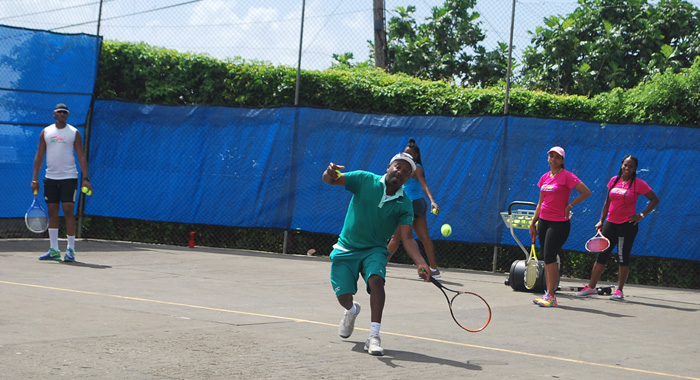 Director of GTC, Grant Connell said the objective was that one coach of GTC would remain on court from 6 a.m. to 6 p.m., during which time individual representatives from the sponsors received an introduction to the game from Connell and head coach, Trevor Sam.

An institution or an individual sponsored each hour of the event.

As part of the fundraiser, the club also held a barbeque and also facilitated the process of collecting food and items of clothing in barrels.

Connell said the event was a success, having raised $11,140 from sponsorship donations and sales from the barbeque.

The proceeds have been used to purchase food items and medical supplies.

Connell said that in light of the destruction that Hurricane Maria wrought in Dominica, since the event was held, the Club has decided to redirect the proceeds of the tennis marathon to Dominica.

Connell thanked all those who made the event a success including the proprietors of the Grand View Hotel — the club’s new home, and the individual sponsors.

Connell liaised with the Dean of the Anglican Church in SVG, who made the necessary arrangements and provided the consignee The Revd. Janet Roberts and The Revd Fr. Victor Peters of the St. George Anglican Church, Morne Bruce, Roseau, Dominica.

The items were scheduled to leave St. Vincent on Thursday afternoon on board the vessel provided by the Government of St. Vincent and the Grenadines.

“We will continue to unearth the power of sports and keep our brothers and sisters who have suffered from the effects of Irma & Maria, in our prayers,” Connell said.