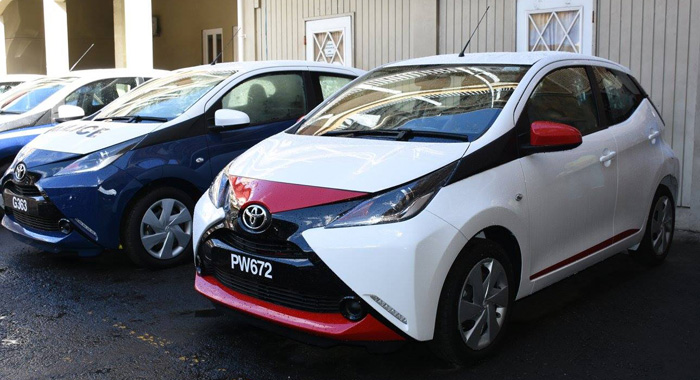 The cars were handed over at a ceremony held at the Central Police Station, Kingstown.

In his welcoming remarks, John, expressed gratitude on behalf of Prime Minister Ralph Gonsalves and Permanent Secretary in the Ministry of National Security, Godfred Pompey, to Monspace for their generous gift to the RSVGPF.

John said the RSVGPF felt special because of Monspace’s gift to them. According to John, the cars were timely and absolutely necessary. They will be distributed to the Traffic Branch, Major Crime Unit, and to the Port Elizabeth Police Station, among others, John explained.

The deputy commissioner urged police officers who will use the cars to drive with due care and attention. There will be quarterly inspections of the vehicles and officers will be trained to drive defensively, according to John.

John said he is aware of the perception that the RSVGPF does not care for its vehicles. In reference to this, he commended the RSVGPF Band for caring for their bus for the last 17 years and the Fire Department, which has two trucks for around 20 years.

He said he hoped that the vehicles will enable the RSVGPF to “properly police the population of St. Vincent and the Grenadines. John also expressed gratitude to the Speaker of the OECS Assembly, Rene Baptiste, who took the initiative to ask Too for the donation.

In her address, Rene Baptiste remarked that from time to time it would be reported that the RSVGPF Officers have said, “they couldn’t come because [they] we don’t have any transport”. To this end, she had the opportunity to interact with Too and this led to her solicitation of the cars. Baptiste hoped that the five cars would enhance the work of the RSVGPF.

According to her, each car cost EC$90,000. Too many times people are quick to say, “Why the Government don’t do this or do that?” Baptiste remarked. Instead, she said, Vincentians should ask, “What can I do for my country?” The former politician then asked the question, “Why can’t we do something for the government?” Miss Baptiste reminded the gathering that the “Government is the people” and that the people in Parliament are the instruments through which the Government operates.

Too, told the gathering that Baptiste impressed him as someone who really loved her country. In light of this, he added that she was prepared to lose face by asking him, a stranger, for such a donation. Initially, he said, she had asked for one car. To which he had replied, “Why one car?” Therefore he was touched to give more than one car.

Too said Monspace is a growing company with investments in property development, online shopping, aviation, and tourism.

He has promised the RSVGPF a further donation of 20 electric motorbikes, should they keep their promise to maintain the cars entrusted to them.

Hadaway, although present at the ceremony, was at the time on vacation leave.