Lawyer floored in court after chair is pulled from under him 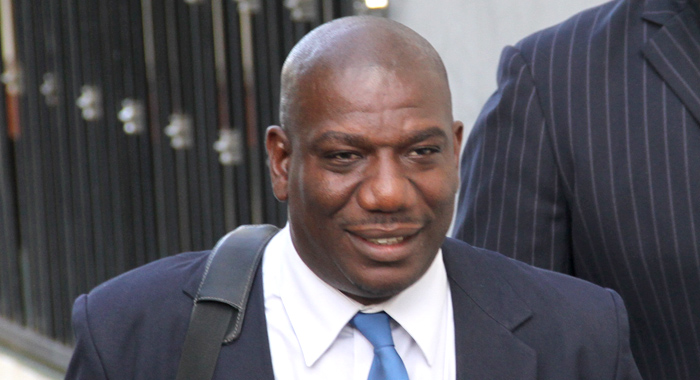 Defence Counsel Israel Bruce found himself the subject of some giggling at the Serious Offences Court on Wednesday when he fell to the floor as he attempted to sit where he thought a chair was.

The lawyer was quickly helped back to his feet by some of his colleagues at the bench.

Chief Magistrate Rechanne Browne-Matthias offered to give the counsel a few minutes to contain himself, but continued with proceedings when she realised it wasn’t necessary.

The incident occurred as Traffic Court prosecutor, Sargent Parnel “Master 9” Browne had pulled out a chair for the lawyer, who had earlier asked him to shift over somewhat at the bar bench.

Bruce later told iWitness News that he had not realised that Browne had pulled the chair all the way out, and when he sat down, there was nothing to receive him.

Browne also made light of the incident, telling iWitness News, separately, that Bruce had not positioned the chair properly before sitting down.

The incident seemed a very innocent one as, neither Browne nor Bruce is likely to do anything to harm the other.

Browne is an executive member of the Police Welfare Association, and Bruce, as their lawyer, has been defending stridently two members of the executive who have been brought up on disciplinary charges.

The charges against PWA president Sergeant Brenton Smith and Constable Kenroy Martin came after WhatsApp voice notes among members of the executive were leaked in June.

Last year, Bruce was master of ceremonies at the police calypso and queen show, where Browne left patrons in stitches with his hilarious song about having only a corporal rank to show after 26 years of dedicated service as a police officer.

Either his song did not fall on deaf ears or his work has finally been seen as he has since been appointed to act as a sergeant of police.