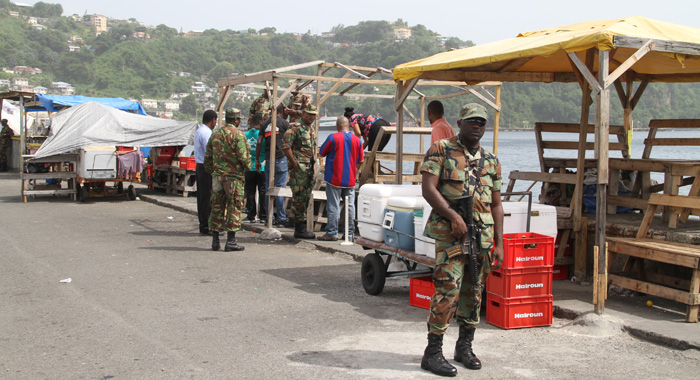 “I tied her to the bed, I was thinking the worst

Then I straight smoked the hoe”

Comments by the Honourable Prime Minister, Dr. Ralph E. Gonsalves, and Senator Julian Francis regarding the recent spate of homicides in our formerly peaceful homeland — eight over a six-day period for a total of 32 since the beginning of the year — focused on the role of interpersonal relations, gang warfare, interdicted substances (marijuana and cocaine), access to guns, and law enforcement.

Neither mentioned the role of poverty — the specious New Democratic Party (NDP) fallback explanation for every affliction in Vinciland under Unity Labour Party rule — presumably because they were unwilling to give the opposition a cheap shot on this issue. Indeed, there has been an inverse relationship between the poverty and murder rates in SVG over the past 50 years: as poverty has gone down, the murder rate has gone up. Conversely, many countries all over the world that are far poorer than ours have far lower murder rates than we do (https://en.wikipedia.org/wiki/List_of_countries_by_intentional_homicide_rate ).

Part of the inverse correlation between poverty and murder rates in SVG and elsewhere is because there is now more wealth to fight and kill over oo especially the proceeds of illegal substances — than ever before.

Although the NDP and many ordinary people have been critical of the inability of the police to prevent these killings, this criticism is also misplaced. Our people have been traditionally reluctant to act as police informants, let alone undercover agents, often subverting police efforts to capture suspected criminals by warning them of the approach of “Babylon,” and habitually avoiding testifying in court against accused persons, either to protect them or out of fear of post-trial retaliation. Under such conditions, all the skill, training, and equipment in the world would still make it virtually impossible for the authorities to proactively prevent extra-legal homicide.

The only alternative would be a police state, including constant police surveillance and harassment, arbitrary search and seizure, free-wheeling wiretapping, perpetual curfews, and military-type trials where those charged would be presumed guilty unless proven innocent. Neither public opinion nor the Constitution would allow this to happen.

Still, most murders related to marijuana and cocaine would disappear overnight if the government could afford to expend all its political capital antagonising much of the populace and many foreign entities by legalising these substances, spending their scarce enforcement resources on the rehabilitation of cocaine addicts and alcoholics instead.

As for access to guns, this certainly makes it easier — and safer — to kill someone. But it is certainly not the “cause” of our growing murder rate.

When considered from a global perspective, there is no correlation between the number of guns per capita in a country and the number of firearm-related murders. The United States has, by far, the most guns in the world per capita, at 89 per 100 people, but has a firearm murder rate of only 3 per 100,000 people. Compare that to Honduras, which has only 6.2 guns per 100 people but the world’s highest murder by firearm rate of 68 per 100,000 people.

Meanwhile, SVG has over eight times the illegal homicide rate of the United States at 27 per 100,000 — we are, regrettably, the 15th most murderous people in the world — but a very low per person rate of legal or illegal firearm possession. (I could find no hard data but my best estimate, based on my knowledge of gun ownership in my home community, is that there are less than five firearms per 100 people).

The role of interpersonal relations and gang warfare, a phenomenon that has spread here slowly but surely from Black America and urban Jamaica, are both rooted in the role played by history, culture, society, community, and family.

We presently have a hodge-podge culture made up of disconnected and contradictory bits and pieces of African, slave-society, and British beliefs, values, and norms, not a good recipe for a unified world view and moral system.

Our society is also fragmented by the rampant individualism, hedonism, degradation of women, and family disintegration created by slavery and its aftermath which has resulted in incompetent parenting, the sexual exploitation and murder of females, low community solidarity, and a dog-eat-dog mentality.

There is also a widespread antipathy among neighbours, villagers, and community members balanced only by a greater aversion to life in other communities. (E.g., “Barrouallie people are bad but Vermont people are worse still.”).

A house or yard is not of home for too many of our people as well. Regularly, when someone dies, family fight over the burial society money. If there is no will, family “fight down” each other over the property left by the deceased. If there is a will, some family claim that it was forged or otherwise choose to subvert it. The most “war” we have these days is between close kin followed by revenge, hate, and greed killings among gang members alienated from their broken families.

Overall, the only constant elements that unite many Vincentians, apart from a superficial understanding of Christianity and lackadaisical allegiance to Christian values, is party or gang affiliation, hardly forces for binding us together as a single people.

From my perspective, the root of the murder problem lies in widespread dysfunctional family organisation, exacerbated by a low level of community solidarity, a dumbed-down state education system inappropriate to our needs, and a lack of legal economic opportunities culminating in rampant idleness and excruciating boredom among young male school leavers. Still, it is hard to accept the NDP claim that unemployment and political victimisation is at the heart of the growing rate of murder when our unemployment rates were just as high and political patronage just as rampant when their party was last in power, a period when murder rates were much lower. And what evidence is there that any of our past or present murders were politically motived?

While the government has control over the public education system, and could do much more to match it to the realities of our society, it can do little to change family structure, community organisation, or the scope of economic opportunities.

With all these maladaptive features of contemporary life in SVG, compounded by the sociopathic “gangsta” culture internalised by our youth via local and overseas media, how could we expect anything other than a high and growing murder rate?

This is the first in a series of essays on crime and the economy in SVG. Find them all here.