Students trudge through mud to get to Argyle primary 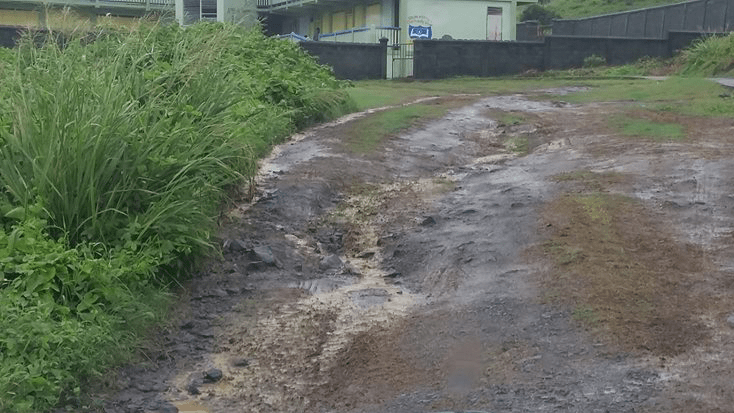 Students at the Argyle RC Primary School have been trudging through mud whenever it rains to get to their campus.

A source with knowledge of the situation told iWitness News that it obtains although the relevant authorities, including area representative, Frederick Stephenson, have been told about it repeatedly.

Although there is a concrete strip that leads to the school, it is situated near an embankment that deposits soil on it, which quickly turns into mud after a downpour, creating a difficulty for staff and students who want to enter the school.

The students at the school wear white shoes ast part of their uniform and iWitness News understands that because of the muddy situation there, many parents choose to keep their children at home whenever it rains.

In addition to the concrete strip, which is not wide enough to accommodate vehicular traffic, staff and parents going to and from the school have to contend with their vehicles sliding on the unpaved road, if theire vehicles do not have 4-wheel drive capabilities.

One person has suggested to iWitness News that the situation can be rectified either by further excavating the embankment and constructing a retaining wall, or shifting the concrete strip further away from the embankment.

The school is also said to have been the victim of repeated burglaries and nothing has been done to address that situation, which has meant repeated depletion of school supplies.

Further, interested parties at the school have been asking authorities to construct a bus shed where the road to the school meets the main road so that students could have somewhere to shelter rain.

That request also seems to have fallen on deaf ears.