Burglary charge for man nabbed where burglar was killed 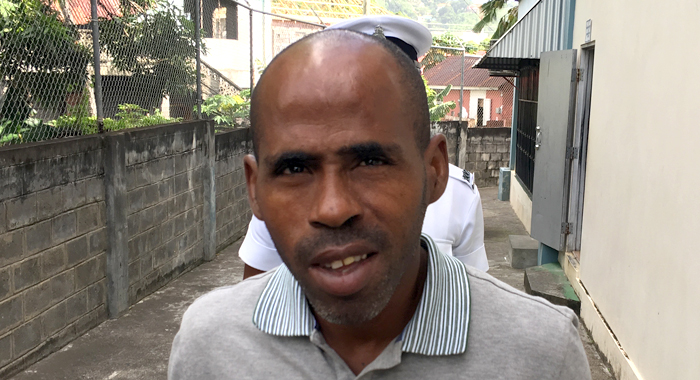 The man who was allegedly nabbed at a house in Cane Garden where police shot and killed another on Tuesday has been charged with aggravated burglary.

Kirk Williams of Sion Hill was charged that on Oct. 10, 2017 at Cane Garden, he entered the dwelling house of Anis Issa of Cane Garden with another as a trespasser and had with him weapons of offence, to wit, a crowbar and a knife”.

He was not required to plea to the indictable charge when he appeared before chief Magistrate Rechanne Browne-Matthias at the Serious Offences Court in Kingstown on Friday.

Senior Prosecutor Adolphus Delplesche objected to bail, noting that Williams allegedly committed the offence while on bail on similar charges that are before the Kingstown Magistrate’s Court.

Delplesche said that while the court must observe the doctrine of an accused person being presumed innocent until proven guilty, it must also observe the principle of some persons having a propensity towards certain offences.

He said that while he is not saying that is the case with Williams, he is objecting to bail given the accused man’s pattern, adding that he is fearful that such a pattern would continue if he is released on bail.

Delplesche suggested to the court that the preliminary inquiry be set for a date early in the New Year.

However, defence counsel Ronnie Marks told the court that while he hears the Crown’s concerns, which were rightly expressed, the prosecutor also noted the presumption of innocence.

Marks suggested that the court impose on the accused man conditions that would address the prosecution’s concerns.

The defence counsel suggested reporting conditions, daily if necessary, and a curfew.

He said that like Delplesche, he is quite familiar with the court’s schedule, but added that it would be unfair to the accused man if at the end of the proceedings he is found not guilty, after spending so much time on remand.

The magistrate, however, said that she cannot overlook that the accused is on bail for a similar offence and said that, in the circumstances, she would not consider bail at all.

The Crown is alleging that police arrested Williams at Issa’s house while responding to a report of a burglary in process there.

Reports are that police trained their guns on the accused man and he complied with their instructions.

However, Leon “Buyaka” Samuel of New Montrose, was shot inside a house at Cane Garden and died later at the Milton Cato Memorial Hospital, when he reportedly attacked police who entered the house after Samuel reportedly disobeyed their instructions to exit the property.

Samuel and Williams were among four men, the others being Recardo Bacchus and Allan Wilson, who were charged with a varying number of counts of burglary last October.

Bacchus pleaded guilty to the charge while his co-accused pleaded not guilty when they appeared at the Kingstown Magistrate’s Court on Nov. 23, 2016.

The men also pleaded the same way for this charge, when they appeared in court, on Nov. 23, 2016.

All four men were further charged that between Nov. 10 and 11, 2016, at Kingstown, they entered the Majestic Express building as trespassers and stole a number of items and EC$4,800 in cash, total value of EC$7,095.

When they appeared in court on Nov. 22, 2016, Bacchus pleaded guilty while his co-accused pleaded not guilty.

Sentencing in the matter was deferred until June.

The other accused men, who had secured bail, were scheduled to return to court last month but the hearing was adjourned.