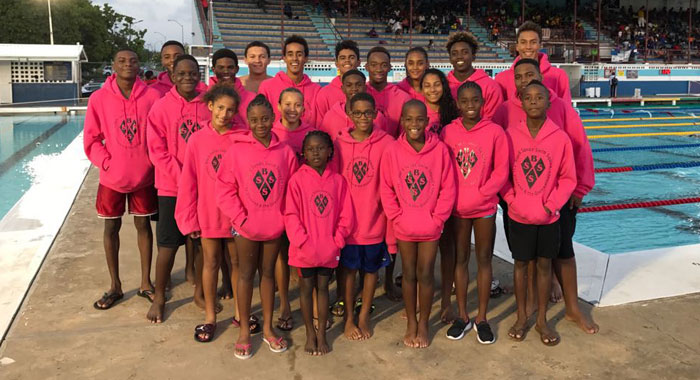 The competition featured 15 clubs from Barbados, Grenada, Trinidad, other Caribbean islands, Guatemala and the United States.

A new name to swimming success, Eltontè Leonard led the way in the boys 9 to 10 age group, swimming himself to 2 gold, 3 silver and 3 bronze medals.

Whilst doing so Leonard smashed 7 SVG national records, achieved 2 AAAA standard times, putting him the top 5 per cent of 9 to 10-year-old age group swimmers in the United States and has qualified for CARIFTA 2018.

By the end of the event, Leonard came home with the 3rd place overall champion trophy.

In the girls 9 to 10 age group, the youngest of the Joachims, Jamie Joachim, swam herself to the medal podium winning 2 silver and 1 bronze medal and broke 3 SVG national records.

Nikolas Sylvester included himself in the medal count by winning 1 gold and 3 bronze medals in the boys 15 years and over category. He was joined by Shane Cadogan with 3 silver and 1 bronze medal and Dillon Gooding wasn’t to be left behind and captured 1 silver medal.

Twenty-two individual medals were proudly brought back to SVG but the medal count and record breaking didn’t stop there.

In the relays Black Sands swimmers made their presence known by swimming both an A and B team in the boys 15 and over Medley relay. Quartet Cruz Halbich, Alex Cyrus, Kyle John and Jeron Thompson made up the B team and they swam themselves to a silver medal and broke the meet record by just over half a second. Then came the A team.

The four males stormed into top spot, winning the gold medal and smashing the meet record by over four seconds making it a Vincy one-two on the medal podium. The 10 and under boys relay team proved their point too. With the help of Seth Byron from St Vincent’s’ Blue Marlins swim club, Brandon George, Jason Sandy and Eltontè Leonard swam to top spot, winning the gold in the 4 x 100 medley relay and girls Jamie Joachim, Abigail Deshong, Kevern Dasilva and Eltonique Leonard proudly swam themselves to a bronze medal

Coach Kyle Dougan said he was overwhelmed with the success of his team and congratulated every swimmer that swam.

St. Vincent and the Grenadines will next be competing in the 2017 OECS swimming championships held in St. Lucia, Nov. 10-12.