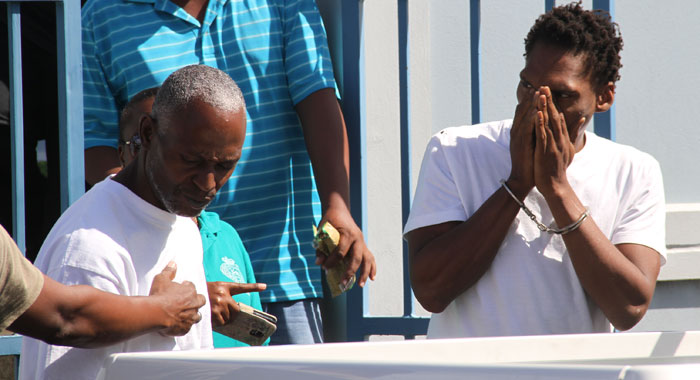 Six months after they were discharged at the end of a preliminary inquiry, two men appeared in court on Tuesday on indictment in connection with the October 2016 shooting death of a baby and injury of his parents in Glen.

This means that rather than having to appear before a magistrate for a preliminary inquiry to determine if the Crown has enough evidence to support the charges, the men have to answer the charges directly before a judge and jury.

On the first count of the indictment, James and McFee are charged with murder in connection with the Oct. 7, 2016 shooting death of 10-month-old Mozary Lee at his father’s workshop in Glen, where gunmen had fired at Monty Hillocks, a resident of Belmont.

The second count is that James and McFee, in attempting to murder Monty Hillocks at Glen, did an act which was more than merely preparatory to the commission of the offence.

The third and fourth counts, two wounding with intent charges, relate to the shooting of the baby’s parent, Shelly-Ann Durham and Mozart Lee at Glen, during the same incident as a result of which the child died.

The men were brought before Magistrate Zoila Ellis-Browne at the Calliaqua Magistrate Court, where defence counsel Grant Connell challenged the court’s jurisdiction on the matter.

Connell pointed out that the warrant of arrest stated that James and McFee were to be brought before the High Court in Kingstown in execution of the warrant.

“This belongs before a High Court, your honour,” Connell told the court.

“So they have wasted the time of, what, 15 officers,” Connell said, in reference to the number of police officers who accompanied the men to court.

The police detail included homicide investigators and officers from the Special Patrol Unit, a tactical squad, whose duties include the secure transportation of accused persons.

“The indictment is before a judge. So they want to bring it before a magistrate’s court when they were already discharged. Amazing. I don’t know what could cause that oversight,” Connell said.

But prosecutor Shamrock Pierre told the court that the Crown was merely asking for the defendants to be remanded in custody on the indictment.

He said he agreed with Connell that the men had been discharged during the preliminary inquiry.

“But the Director of Public Prosecutions has applied to the judge using a voluntary bill, your honour, and that application was upheld and the indictment was handed to the prosecution,” Pierre said and restated his application.

He said the men would then be arraigned at the earliest sitting of the High Court.

There was further back and forth on the matter and the magistrate stood the matter down to further review the law.

Later on Tuesday, Senior Prosecutor Adolphus Delplesche arrived at court and Connell then told the court that after consultation with Delplesche and having seen another document he was no longer challenging the court’s jurisdiction.

The magistrate also ruled that she has full jurisdiction to receive inquiry into all matters and said that the men were remanded to prison until they could appear before the High Court.

On April 25, 2017, James and McFee were freed at the preliminary inquiry stage on a charge of murder of the baby and the attempted murder of his parents.

They were discharged at the Serious Offences Court after Chief Magistrate Rechanne Browne-Matthias upheld no-case submissions made by their lawyers — Israel Bruce and Grant Connell.

Delplesche, who presented the Crown’s case, had noted that the men were discharged, rather than the case against them dismissed — suggesting that the Crown would consider bringing the charges against the men again.

While James was free to leave the court, McFee went back to Her Majesty’s Prisons to continue a sentence for firearm possession.

James, however, did not leave the court immediately, as his lawyer, Connell, told Delplesche that his client was requesting police escort from the court precinct — presumably out of fear for his life.

The case against the men had fallen apart after the court had earlier, on April 25, denied an application by the prosecution for an adjournment.

Delplesche had told the court that the adjournment was to facilitate the receipt of evidence from a witness under the Witness Special Measures Act.

The prosecution had intended to call Hillocks, who reportedly had concerns about his safety, to give testimony by video link.

Since the attempt on his life that led to the death of the baby, Hillocks was himself hauled before the court on gun and ammunition charges.

He was arrested last December and charged with possession of a 9 mm semi automatic Glock pistol and 14 rounds of ammunition, without a licence.

He was freed of those charges in March.

The defence had objected strongly to the prosecution’s request for an adjournment, with Connell accusing the prosecution of engaging in legal gymnastics, which Delplesche denied.

The prosecution then called its final witness, detective inspector Sherol James, the lead investigator in the case.

After the court heard James’ evidence, the defence counsel made no-case submissions, which were upheld.

In addition to the four charges brought against him last week, McFee is on remand on an attempted murder charge, relating to the Oct. 15, shooting of Paul Avenue resident Jawansa Sanga Fraser.

McFee is also facing two other charges in connection with the same incident and has been charged along with Colin “Cocoa” David of Villa and Jomarno “Small Man” Tash.

McFee has told the court that he was the target when masked gunmen fired some 40 rounds on patrons at a bar in Diamond on Oct. 14, injuring eight persons, one of whom died two days later.

On June 10, 2017, gunmen shot and injured James and Natterell Stapleton, a vendor, of Calder, at the Young Island dock in Villa.