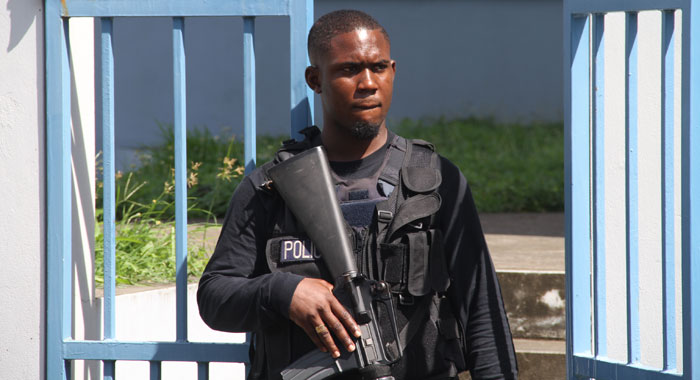 A heavily armed police officer entered a house in Calliaqua on Tuesday and slapped an occupant after hearing the man swearing from the street.

The man, Vibert Bennett, 54, who lives across from the Calliaqua Town Hall, told iWitness News of the incident shortly after it occurred on Tuesday.

“I was there sitting having a drink and thing like that; buss a tweed, the man just come over he and a next policeman and hold me and slap me off just like that,” Bennett told iWitness News.

The man, who wet himself during the ordeal, told iWitness News he had used the “F note”, but had not directed it at anyone.

A police officer can arrest and charge someone for using swear words in public or if the words, considered by the Criminal Code as offensive language, can be heard in a public place. 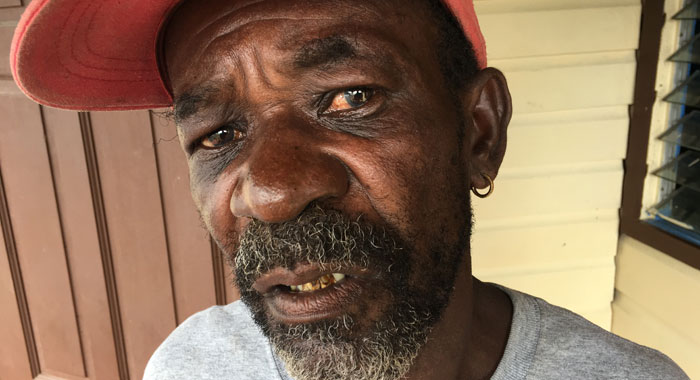 Bennett said that the police officer did not say anything to him when he entered his home with an equally heavily-armed colleague and administered the blows.

“You don’t come in people’s place like that,” said Bennett who pointed out to iWitness News that his face had reddened because of the slaps.

He further said that the police officer knocked out one of his teeth when he inflicted the blows.

“He come and harass me in my home. That is not right. That is too much ah nastiness going on in St. Vincent,” he said.

The police officer, however, denied slapping the Bennett, who came to the Calliaqua Magistrate’s Court, located in the same complex, during a recess and told other police officers and persons at the court of the incident.

The police officers, who were armed with assault rifles and short arms were providing security at the Calliaqua Magistrate’s Court where Martin “Jahson” James and Ricardo “Shrek” McFee had been brought after being indicted on Oct. 26, 2017 with the Oct. 7, 2017 murder of a 10-month-old baby.

The team also included detectives from the Major Crime Unit, who investigate homicides and other serious crimes.

James and McFee were in April discharged on the same charge at the preliminary inquiry stage.

It is not clear who took up the security slack after the two police officers abandoned their post at the main entrance to the building to go after Bennett.

The police officer’s assault of the civilian came at a time when the police struggle to convert intelligence into evidence amidst a spate of killings and shootings across the country.

A teacher at the preschool located in the town hall building told iWitness News that she had heard when the man swore.

It was not clear whether the teachers or the students had seen when the police entered the man’s house or slapped him.

But the man spoke about the incident outside the building, within earshot of the students.

The beating also took place less than 24 hours after a man who is in hiding from the police, told iWitness News that he had witnessed police brutalizing his friend and was afraid that he could be on the receiving end of similar treatment.

iWitness News advised Bennett to report the incident to the Calliaqua Police Station and the Police Public Relations Department, which is a standard procedure for these types of incidents.

Bennett reported the incident to Station Sergeant of Police Dwayne Bailey who was the most senior officer among the team, but who did not witness the incident involving the other officers.