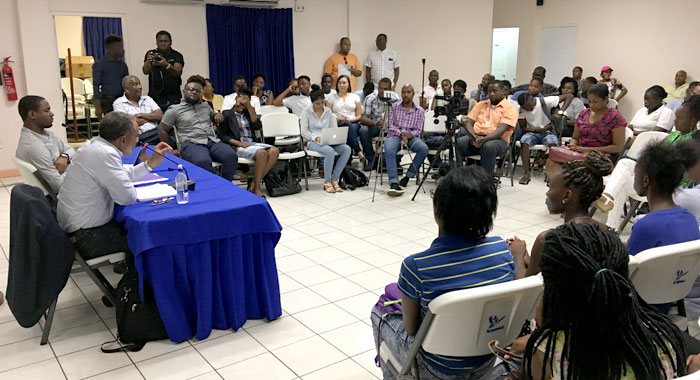 Friday in discussion with youth at the event. (iWN photo)

A speaker at Leader of the Opposition, Godwin Friday’s National Youth Dialogue on Thursday asked him for assurance that the nation’s youth would not be victimised under his administration for their views.

“A lot of us as youth face victimisation in everyday living. Some of us are afraid to come out to these types of forum and say things,” a young woman, who did not identify herself, said at the forum in Kingstown.

“We may not be exactly affiliated with a certain party or a certain group but just because we may oppose what they have to say or their opinions, we are deemed as party followers, NDP (New Democratic Party) follower or whatever.

Friday told the young woman that her question cuts across “so many facets of our lives”.

“And it’s not just young people. Far too many people are too timid in terms of how they express themselves.”

He said that many young people are entering an economy where there are not many jobs and they, therefore, feel very vulnerable.

“I think if we can grow the economy, there are a lot more opportunities, that gives more space for individuals to operate, so we will do so,” Friday said at the forum, said to be the first of its kind in St. Vincent and the Grenadines.

He said that to show that all is not lost, Friday related an experience he had while interacting with supporters of the Unity Labour Party (ULP) in Texier Road, a section of Layou, that “is not necessarily always friendly to NDP”.

“They had lots of bracelets on and we were laughing and joking and I said to the woman, I am going to come and take a picture with you because I want to put it on Facebook,” Friday said, laughing.

“The point I am making, she may never vote for me. I hope she does, but the point is that she felt, listen, it doesn’t matter who I vote for, it doesn’t matter what my political colouration is. Friday and the other fellas, they come here, they want to chat with us like human beings, like Vincentians. Why can’t we have a laugh, why can’t we have a chat? Who should I be afraid of? Why should I have to be afraid of somebody who I put there? Why I have to worry?”

Friday, who will, this year, celebrate his one year anniversary as opposition leader and president of the NDP, said that more often persons do not want photos they take with him posted on social media for fear of victimisation.

“But this person (woman in Layou) is saying, I vote for who I vote for. I’m telling you who I support, you coming and chatting me, why wouldn’t I want to take a picture with you?

“That sort of thinking is really the thinking of somebody in a free society. And we must always protect the rights to do it. And those of us who are older, who have opportunities to assist young people to overcome that hurdle, because it is not easy…”

He said young people in his constituency who are around him worry about the repercussions when they have to find jobs.

“They worry because they are real.

“What I would say is that I would give you my absolute commitment that that would never happen under my government. And if it does, there will be consequences. Because we are too small, 110,000 people trying to find our way, we are like a lost leaf drifting along the oceans of the economic currents of this world. We need each other. After we have voted, we need to come together and say let us pull together. Let’s rout together, let us try to build St. Vincent for all of us. And that is what I want us to commit ourselves to.”

At the forum, Shakiel Lewis, a young resident of West Kingstown, asked Friday how would he, as prime minister,  make life better for young people.

Lewis wanted to know what policies the NDP would implement and how its vision is to be achieved.

The opposition leader said he wanted to know what the nation’s youth are concerned about, the primary concerns of Community College students when studying and approaching the end of their courses,

“And that helps to motivate and guide us.”

He said, however, that his preoccupation is to try to help create opportunities for young people.

The opposition leader said if that is done, SVG is going to be “a second-best country.

“I don’t believe St. Vincent and the Grenadines ought to be a second-best country,” he said, adding that the nation often leads in the wrong indices.

“Why can’t we be leaders in St. Vincent and the Grenadines when we have all the assets, positive assets, all of the gifts that God gave us and we are not utilising them? That is because we have to put our intellect, our resources together and to create that environment for ourselves.”

The opposition leader said his preoccupation would be to create a vibrant and growing economy.

“This we haven’t had for several years. This will require that we put more effort, money and technology in the existing sectors,” he said, mentioning agriculture and fishing.

“Agriculture will be changing but we must all agree it has an important role to play in the economy of St. Vincent and the Grenadines.”

He said the nation must look for new sectors of the economy to develop, especially for the young people.

“What I want the young people to say, listen, Friday, we need to create this new information technology sector in the economy… So the point is, how can we take advantage of this area, this sector of the economy that we, in St. Vincent and the Grenadines, the entire Caribbean really have left up to the people in North America and Europe to do when, in fact, the opportunities are here as well.”

One reply on “Youth ask Opposition Leader for anti-victimisation assurance”