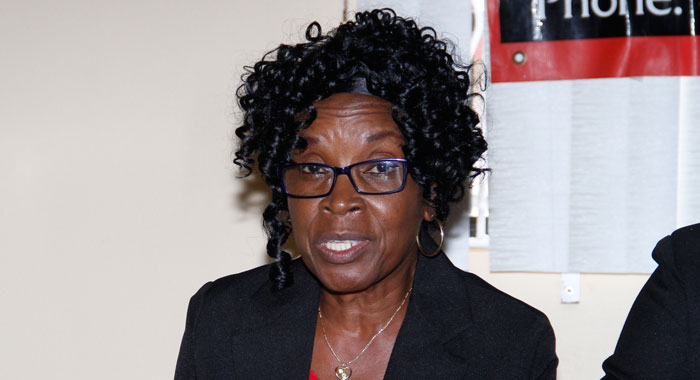 The St. Vincent and the Grenadines Teachers’ Union is joining their regional counterparts in pushing the Caribbean Examination Council (CXC) to compensate teachers for marking the school-based assessment component of CXC exams.

“… it is our view that CXC is acting outside of its remit when it asks us to do additional work for which we are not compensated,” Paulette Williams, general Secretary of the SVGTU told a press conference in Kingstown on Tuesday.

She said that she is drafting a resolution to present to union members at its annual meeting at Thomas Saunders Secondary School next Wednesday at 4:30 p.m.

“And really want to invite as many secondary school teachers as possible to come out and support that,” Williams said.

“We are saying that our employer is the Government of St. Vincent and the Grenadines and not CXC and so when they pile on more workload and they are bringing on more subjects now to write SBAs and teachers have to correct draft, after draft, after draft, and then the final documents. And it is onerous and we are saying that we should be compensated for this work,” Williams said.

“It is a vexing issue and it has been languishing for some time,” Williams said.

“We have been mandated by the Caribbean Union of Teachers to bring back, to report a position that is the position of the teachers in St. Vincent and the Grenadines, and, specifically, those who are directly affected.”

She said the “battle” is more one of secondary school teachers, but is also a fight for all teachers.

The Barbados Secondary School teachers Association has been carrying the fight for the rest of the region and the Caribbean Union of Teachers (CUT) is now saying that the other unions “need to step up to the plate,” Williams said.

“And we are doing that, drafting another resolution to take to the annual general meeting, and I would really want to invite as many secondary school teachers as possible to come out and support that position,” Williams said.

She said the union knows it is a hard road, adding that the Government of Barbados had threatened to fire teachers who decided that they would not mark CXC SBAs.

“We don’t want to get to the stage where we have to be involved in a fight with our government over this. We believe it is CXC’s responsibility and we want to send that message in very, very clear terms so that we will have some movement on this issue, ultimately,” Williams said.