Promoter rebuts calls for ‘Road Trip’ event to be banned 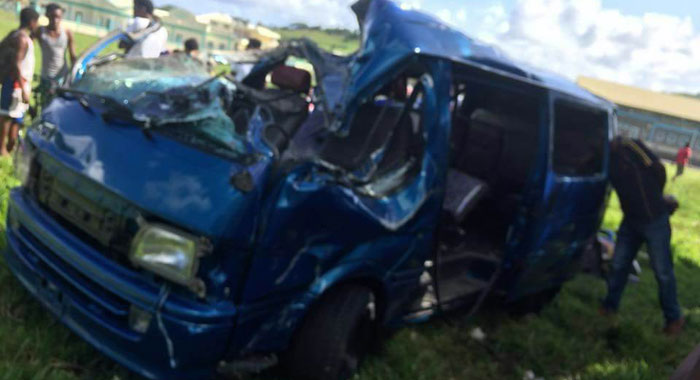 The organiser of Saturday’s “Unsolved Mysteries Road Trip” in which a van transporting young patrons crashed at Diamond has rebutted calls for the event to be banned.

Lemore Garth Ryan, 31, further told iWitness News on Sunday that none of the persons injured were students and only one of them remained in hospital Sunday night.

A minivan, of which the registration and ownership details are yet to be ascertained, crashed into a utility pole then landed in an open field at Diamond Estate on the way to the event in South Rivers.

Persons have complained about the loud music and recklessness of driver associated with the event and have used social media to call for it to be banned.

“What are you going to do? Ban the vans on the road from driving? It is an unfortunate situation and one of the guys who was in the accident and I are very close friends. I would not want anything bad to happen to them, hence the reason why I followed every possible protocol with them to make sure that they understand what’s going on,” Ryan told iWitness News.

“If you ban that event, it’s just like telling me you are going to ban an Independence bikers’ weekend, where several years ago a biker died,” Ryan said, referring to the 2014 death of a Martiniquan motorcyclist when he went under a truck in Arnos Vale — in an incident not related to the Independence bikers’ activities.

“Bikers have been dying, people have been crashing, fatal accidents, how can you blame the event for that (Saturday’s crash)? That’s not logic. The event went smoothly, there was no incident at the event, everyone enjoyed themselves at the event. If you ban that event, is that going to stop a van from speeding and crashing?” he said.

Ryan also noted that the event was not a Community College event, although he said it was marketed to young people.

“I see they (social media users) post about College road trip and College road trip. Nowhere in our promotion for years — I could send you the last five years’ of promotions we’ve been doing — we never mentioned anything about college. We never even went to College and hand out a flyer. But I don’t know where this assumption that it is a college road trip [comes from]…

“It’s young people, young adolescent people, there are a lot of people at home not doing anything. Certain events that we do, it’s geared towards everybody; certain events, those people will come. I cannot change a person’s opinion that I might look finy (petite) and I might look small and you might be thinking that I am 16 when I am actually 21 or I am actually 25.”

The promoter told iWitness News that he has been organising the event for eight years and tries to improve annually.

He said that a fight broke out last year so organisers had to consider increased security. This year, they had a number of police officers, some armed, at the event.

Ryan told iWitness News that the vans were hired to transport persons to the event and he created a WhatsApp group for drivers and conductors in which he told them what exactly was expected of them.

He said he further spoke to the head of the Traffic Branch, Superintendent of Police Kenneth John regarding what was expected of the drivers while on the road.

Ryan told iWitness News that John emphasised that the van should not be overloaded and that they should take their time on the road.

He told iWitness News that the van that crashed was not overloaded.

“We were not promoting any sort of thing to go against what the law requires. Could I have taken the wheel from the driver and drive the van up to South Rivers where I was? No, I couldn’t have done that. The most I could have done was speak to them,” Ryan said.

He said that as far as he was told, the accident occurred because the van was speeding and lost traction on some gravel in Diamond.

“But the guys who got injured, he told me today they were not racing. What they did, when they reach Diamond stretch, they did speed across the stretch. And he was trying to go around the corner, I guess the vehicle didn’t gear down properly or something like that and then you know once it hit the gravel, it lost traction and that’s how it ended up on the pole. I wasn’t there so I could only relate what was said to me,” said Ryan, who was in South Rivers at the venue of the event when the accident occurred.

Ryan said that five persons, including the driver, were taken to hospital.

He told iWitness News that one of them had a fractured arm, two suffered blows to the head, while another had no external injuries but was kept for observation because he complained of feeling pain.

He said the injured persons were a Community College graduate, the conductor of another van, and an unemployed person.

The driver of the van, who Ryan said he only knows as “Scrape”, the same name as the van, got a scrape in the accident.

“The picture of the van [in the open field] that you are seeing is actually after the van rolled down the bank when everybody came out the van,” Ryan told iWitness News.

“Everybody is thinking that the van rolled down the bank with everybody inside of it and it ended up in that condition. The van lashed the pole first and stuck right there. Then everybody came out [of] the van. I was not there but I spoke to the guy that got the most injuries,” Ryan said.

“From what I have been gathering, everybody is putting it out there that I am the one or the event is the one that caused the accident. We have to be logical [about] things. I was nowhere on the scene. I did my part in basically instructing everybody what they should have done. Am I wrong for doing that?”

Ryan said that the van was licensed and insured.

“It is a working van on the road every day and the Traffic police are really good enough to know what vans are properly dealt with and all that stuff. They must be checking because they are around the bus stop every day dealing with all that kind of stuff,” he told iWitness News.