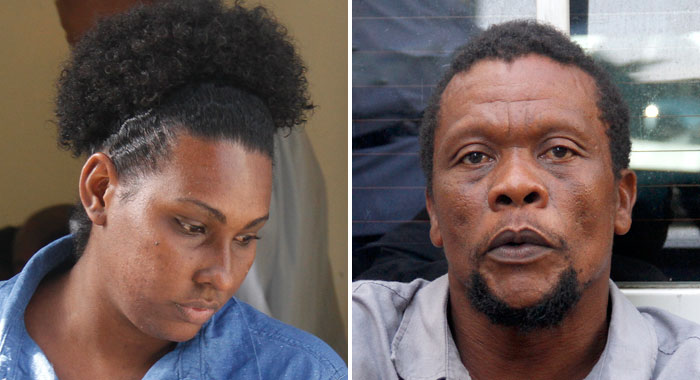 A Bequia couple was on Monday brought before the Serious Offence Court in Kingstown, charged with possession of 53lbs of cocaine on Nov. 15, 2017.

Aldo Osbourne, 45, and Shari Ollivierre, 32, both of Bequia, were not required to plead to the cocaine-related charges when they appeared before Chief Magistrate Rechanne Browne-Matthias.

They were further charged that on Nov. 15, also at Bequia, they had in their possession, 53lbs of cocaine for the purpose of drug trafficking.

The duo was also charged with conspiracy to commit drug trafficking, an offence they allegedly committed between Nov. 13 and 15, 2017.

Senior Prosecutor Adolphus Delplesche did not object to bail but asked the court to demand sufficient surety.

Delplesche further asked the court to order the accused to surrender their travel documents, impose reporting conditions, and issue stop notices, preventing them from leaving St. Vincent and the Grenadines.

He further told the court that the drug has an estimated street value of EC$2,016,000 and that this should be factored-in if bail is being considered.

“You want me to consider it after that sum?” the magistrate said.

She then stood down the matter, telling the accused: “Step down. Let me consider bail — if I’d let you have bail at all.”

When the hearing reconvened, the chief magistrate told the court that notwithstanding the amount of cocaine in the matter, she would grant composite bail in the sum of EC$200,000 each.

Browne-Matthias also ordered the accused to surrender their travel documents and report to the Port Elizabeth Police Station on Mondays, Wednesday, and Fridays, between 6 a.m. and 6 p.m.

They must also seek permission from the court to leave the jurisdiction.

The matter was adjourned to Jan. 29, 2018 for a preliminary inquiry.