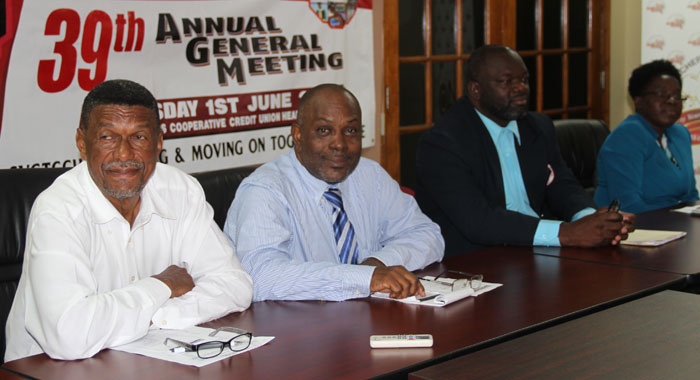 The St. Vincent and the Grenadines Teachers Cooperative Credit Union will hold a number of activities over the next year to celebrate its 40th anniversary.

“To live to see 40 years is a blessing and it is certainly so for us at the Teachers Cooperative Credit Union Ltd. to be celebrating this milestone,” chief executive officer Jasmine Huggins-Daly told a media launch at the union headquarters in Kingstown.

“This organisation was born out of the 1975 Teachers Strike to provide well-needed support to those teachers who were victimised by the Government of the day.  This provided the impetus in 1978 for what is now the Teachers Cooperative Credit Union,” she said, putting in context the genesis of the credit union.

In outlining some of the union’s accomplishments, Huggins-Daly noted that the union has expanded the service to its members by establishing branches in Bequia, Union Island and in Barrouallie — when it amalgamated with the Barrouallie Credit Union.

“Our online banking service was launched in June of this year and we will be launching our ATM service to the general public by Dec. 15, 2017,” she said.

She noted that initially, membership in the credit union was restricted to unionised teachers.

“It was expanded to immediate family and then other members and now we have our common bond that includes all Vincentians at home and abroad. So we have good reason to celebrate, the credit union is growing and will continue to grow and pledge our commitment to give continuous excellent service to our members and stakeholders,” she said.

Huggins-Daly later told iWitness News that it is a good feeling to be at the helm of the credit union when it is celebrating its 40th anniversary.

She noted that the credit union exists at a time when there are challenges to the financial sector some of which have resulted in commercial banks imposing monthly fees on depositors.

Huggins-Daly told iWitness News that de-risking by the international banks is a challenge for the credit union.

“We still have to do business with international agencies and persons who are living overseas. But, in terms of advantage, we have an advantage because our members continue to support and do business. They have confidence and they continue to come and support the credit union.”

Huggins-Daly has taken over from founder manager, Julian Jack, who retired last year after years at the helm of the credit union.

“From there on, it started growing in terms of recruiting people to come on and to train them,” said Jack who continues to advise the board of directors.

He said that in the early days the credit union didn’t have “any money” as savings were small.

“We had to encourage them to commit to save because there were a lot of people who used to just save $5 a month.”

He said that since then, the credit union has done pretty well “but at this point in time, we can start to get involved in other things. People want the money to go and build houses,” Jack said, adding that he has floated the idea of credit unions joining together to source and sell products for furnishing houses.

Activities to mark the 40th anniversary