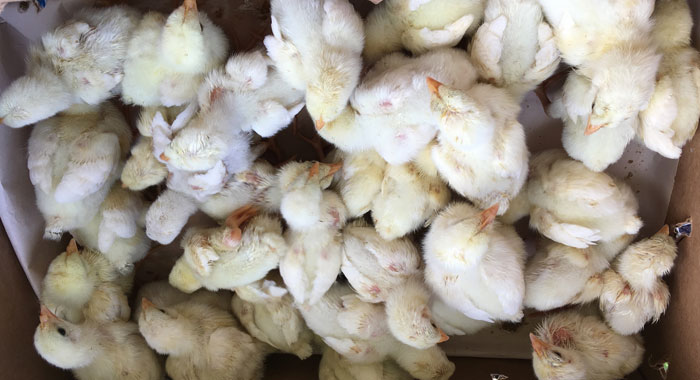 The broiler hatchlings that Allan Baker donated to the students on Wednesday. (iWN photo)

A businessman has donated 30 broiler hatchlings to agricultural science students at Bishop’s College, whose school-leaving project was thrown into jeopardy after nearly two-thirds of their 4-week-old broilers were stolen.

Allan Baker, who operates a poultry business, selling hatchlings and animal feed in the city, made the donation on Wednesday, the same day that iWitness News reported on the theft.

Students at the school told us on Tuesday of how the theft of 72 of the 100 broilers chicks they bought on Oct. 25 could potentially affect their school-based assessment and also the continuity of the project.

The project is funded by using the profit from each year’s slaughter of the broilers to buy hatchlings for the incoming batch of Form 5 students.

The student’s teacher, Ashley Browne, thanked Baker for his donation and said that steps would be taken to try to ensure that no further theft of the birds occurs.

One reply on “Businessman donates chicks to robbed students”