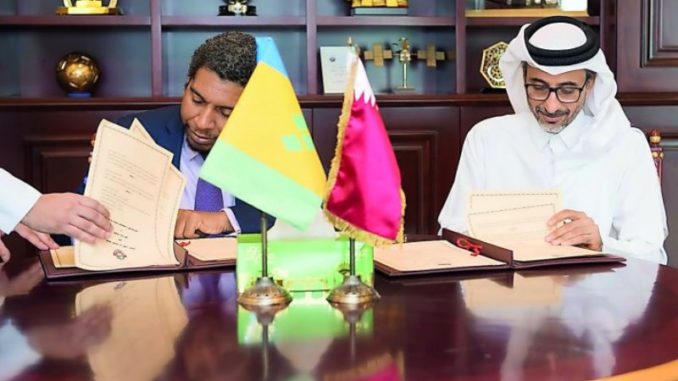 St. Vincent and the Grenadines has signed a cultural cooperation agreement with the Qatari Ministry of Sports and Culture that speaks to youth from both countries visiting each other to better understand their cultures.

Minister of Finance and Economic Development, Camillo Gonsalves, told a press conference in Kingstown on Tuesday that Qatari youth would probably visit SVG around Carnival time and young Vincentians would go to Qatar during national festivals to learn about Qatari culture.

“And we both believe that people to people links are very important, educating each other about our respective cultures,” he said as he reported on a meeting he had with Qatar’s Minister of Culture and Sports, Salah bin Ghanem Al Ali.

“In St. Vincent and the Grenadines, some people of the Muslim faith get a bad rap because of what we see on western media and so on. The best way for the truth to come out about the peaceful and friendly nature of people on that side of the world is to go there and see it with your own eyes,” Gonsalves said as he reported on a recent official visit to Qatar.

“Similarly, they have a view of the West and of Caribbean people and so on. The best way to bridge those gaps and misunderstandings is for young people to interact with one another.”

Gonsalves further said that the Qatari experts in excavation, archaeology and preservation of historical treasure inquired about partnering with the government of SVG in the construction of a facility to display the artefacts unearthed during the construction of Argyle International airport.

The Qatari government also inquired about whether SVG had sufficient artefacts that it can lend to the Qatari museum at an appropriate time to do a display about Amerindian pottery from this part of the world.

“That is not my area of expertise so I simply said I would transmit that information to the relevant people,” Gonsalves said.

In the area of sports, both sides discussed SVG’s desire for an athletic facility and additional sporting facilities in SVG.

The SVG delegation was put in touch with the entity building the World Cup stadia in Qatar, which also has a mandate to construct facilities in other parts of the world as part of the legacy of the World Cup, Gonsalves said.

He said there was a fruitful discussion about the possibility of Qatar doing something like that in SVG and Kingstown’s Minister of Sports, Cecil “Ces” McKie will follow up on those discussions.

“But I will say it was a very, very positive discussion that we had about the construction of a — I am not going to split hairs and say whether it is a facility or a national stadium and all the rest of it — but a facility, certainly, that would accommodate athletics and football here in St. Vincent and the Grenadines,” Gonsalves said.