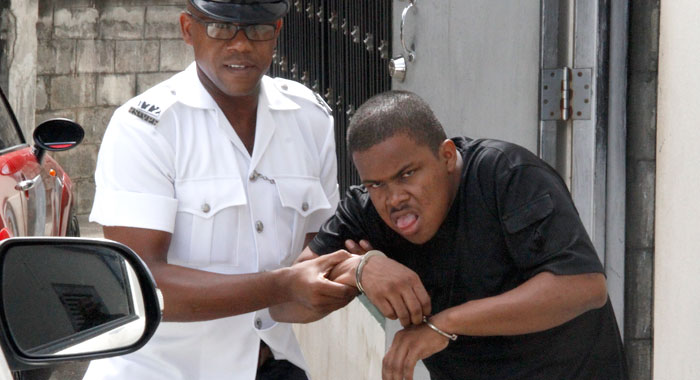 A police officer assists accused murderer Jurani Baptiste to a vehicle to be transported to hospital on Monday. (iWN photo)

A police officer was given a scare as murder accused, Jurani Baptiste, suddenly complained of feeling unwell and became limp as he was being escorted to the restroom at the Serious Offences Court on Monday.

The 19-year-old Sandy Bay youth, who has a history of mental health issues, is charged with the murder of retired nurse Pamela Williams of Kingstown Park, one of four persons he is suspected of killing between Nov. 13 and 14, 2016.

Baptiste was in court for the preliminary inquiry into the killing when he asked to be taken to the restroom, located on the ground floor of the two-storey building.

As he came down the stairs, in handcuffs, he told the police officer that he was feeling “bad” – nauseated.

The officer asked him if he wanted to be taken back to the court, but Baptiste said he would like to go to the restroom.

As he was walking, Baptiste who now has an abnormal gait from a leg injury he had sustained when persons restrained him, reportedly after the killing of Williams, became limp.

The officer decided to take him upstairs, telling the accused man that he didn’t want him to faint.

As he was taken back to the waiting area of the court on the upper level of the building, Baptiste’s body began to contort and his tongue hung loosely as the police waited for one of their vehicles to take him to the hospital.

The vehicle arrived shortly after and he was taken to the Milton Cato Memorial Hospital.

iWitness News understand that the development was as a result of the medication that Baptiste is taking for his medical condition.

Baptiste is also the sole suspect in the killing of 35-year old Nicholas Layne of Edinboro, who was killed in Campden Park, and 47-year old Ronald Israel and his 75-year-old mother, Avis Israel, who were killed in their Old Montrose home.

Police, however, have not brought any charges against him in relation to those deaths.

A senior police officer told iWitness News that detectives are awaiting the results of items sent for forensic analyses to determine if to lay charges against Baptiste in relation to those killings.

The killings, allegedly at the hands of the one-time star cricketer, are said to represent the culmination of some five troubled years that began when Baptiste was a second form student at the St. Vincent Grammar School and his mother, Celia Baptiste, found marijuana in his school bag.

The teen is said to have graduated to cocaine and would go on to suffer two nervous breakdowns in 2015, and attempt to assault several persons in his Old Sandy Bay community, an iWitness News investigation has found.

Just one week before the killings Baptiste is suspected of committing, the prosecutor at the Georgetown Magistrate’s Court suggested that he be sent for another psychiatric evaluation.

He was scheduled to meet with a psychiatrist on Nov. 9, 2016 but heavy rains associated with a trough system disrupted that plan.

What happened in the four days thereafter is not clear, but Baptiste would come to the attention of the nation less than a week after, accused of murdering four persons in less than three hours.

The head of each victim was smashed and some of them had stab wounds, police have said.