The Mutilated Ballots! – Facts Or Conspiracy? 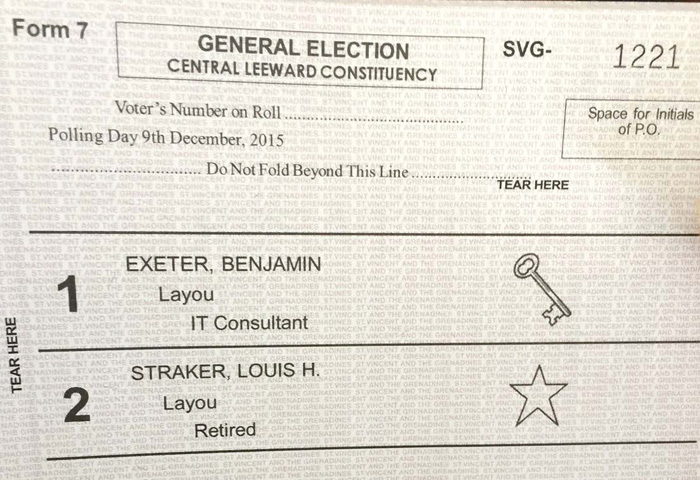 The NDP has raised concerns about the design of the ballots used in the 2015 general elections. (Photo: NDP)

Editor’s note: The High Court is scheduled to hear on Tuesday and Wednesday the petitioner’s motion to inspect ballots and other documents used in Central Leeward in the Dec. 9, 2015 general elections.

In its issue of Friday, Nov. 17, 2016, the News published photographs which reproduced the ballot papers that were used in the December 2015 Central Leeward election. This ballot paper is shown to have been printed in a most irregular way when compared with the Form prescribed by the House of Assembly Election Rules that the ballot papers shall “…….be printed in accordance with the directions therein and shall (a) contain the names alphabetically arranged according to surnames and numbered accordingly and other particulars of the candidates as shown in the statement of the persons nominated opposite to the name of each candidate there shall be printed one of the symbols as are specified in Form 8 in the Appendix which shall be allotted by the Supervisor of Elections; (b) be capable of being folded;(c) have a space provided on the face of the ballot for the initials of the presiding officer; and (d) have attached a counterfoil and a stub, and a line or perforations between the ballot and the counterfoil and between the counterfoil and stub, the whole as in Form 7 in the Appendix.”

Also published in the News were photographs of actual ballots that were cast by voters in the Central Leeward election and these are depicted as abnormal in comparison with the requirements of the Election Rules. As a result, Ben Exeter described them in the Court documents as “mutilated ballots”, since they were cut or torn in an irregular manner such that the top portion of the ballot paper containing the space for the Presiding Officer’s initials and the official mark was absent.

In an affidavit by the Returning officer for Central Leeward, Mr. Winston Gaymes which is filed in the Court, he states about these mutilated ballots that

Mr. Exeter and his lawyers, however, indicated to me that they were not objecting to the ballots and consented to all the votes in box CLF being counted. That is the time and occasion I said, “what is good for the goose is good for the gander”. I meant that Mr. Exeter’s consent was the right thing to do as both candidates would receive and in fact received votes from this box.

I therefore counted the ballots in box CLF……. Sir Louis Straker received 121 votes and Mr. Exeter 101 votes, there were no rejected ballots…”

This action by the Returning Officer went squarely against the provisions of the Election Rule that proscribes categorically, that a ballot paper that does not have the official mark is invalid and should not be counted. Mr. Exeter and his lawyer have filed separate sworn statements denying any such agreement to counting of these mutilated ballots.

The members of the Organization for American States (OAS) Electoral Observer Mission confirmed this state of affairs in their Final Report published in December 2016, where they report that:

Partiality of the Returning Officer: The bias of the Returning Officer towards the ULP candidate and agents was clear. During the period witnessed by the OAS Observers, the RO routinely ignored attempts by the NDP agents to gain his attention, responded to their concerns or objections in a dismissive or exasperated fashion, or complained that they were wasting his time. On the other hand, concerns voiced by ULP agents were immediately addressed and in one particular instance converted by the Returning Officer into a new instruction for the counting process. It was notable that the instruction was revoked only after a lead ULP agent agreed that it should be.”

Elections not conducted in accordance with the law

Professor Dennie’s analysis of the effect of invalid votes

It is of some interest, that in the issue of the Searchlight dated  Feb. 5, 2016, Dr. Garry Michael Dennie, a Vincentian who is Professor of History at St Mary’s College Maryland, USA, published an article entitled “Muddled Conspiracies Maths, Science, and Vincentian politics, 1951 – 2015”, which appeared to be an erudite critique, of the challenge made against the December 2015 Election results in Central Leeward. Professor Dennie, in what must be a botched effort at ridiculing the allegations made in Mr. Exeter’s Petition that numerous mutilated ballots were counted even though these were invalid, wrote that:

“ON DECEMBER 9, 2015, three hundred constituents of Central Leeward awoke. Some had breakfast; some did not. They showered; some long, some short. Some were men; some were women. Some were young; some were old. They then left their homes, went to the voting booths, and they “mutilated” their ballots, or someone else did. And then contrary to Vincentian election law, the election officials counted the “mutilated ballots”.

This story as told by the New Democratic Party (NDP) is, “The Conspiracy of the Mutilated Ballots.”

No one knows “The Three Hundred;” their ballots remain secret. But they were not alone in this. Sixteen other voters in Central Leeward did the same thing. Indeed, across the country 186 persons also “mutilated” their ballots. But this is unsurprising. Their invalidated ballots were but a decimal point – less than one third of one per cent of all votes cast in 2015. And this was fully in line with voter performance in St Vincent and the Grenadines since 1979. In other words, over the past 40 years. more than 99.5 per cent of Vincentians have cast their ballots properly. These numbers affirm that long before 2015, the Vincentian voter had mastered the art of voting.

That is, until December 9, 2015, when in the Central Leeward constituency, they regressed. By definition, “the Conspiracy of the Mutilated Ballots” repudiates the idea of a Vincentian electorate superbly skilled in the art of voting. The NDP insists instead that voter incompetence destroyed 300 ballots placing them beyond the count. But the NDP may not have been aware of an absolutely astonishing fact, this error rate in one constituency exceeds the combined error rate of all the other constituencies. Indeed, it also exceeds the combined national error rate in every election since 1994. No mathematical model exists to explain this staggering anomaly. Yet, it is upon this stony ground that the NDP seeds “the Conspiracy of the Mutilated Ballot.”

“Sixty-five years of Vincentian electoral data provide indisputable proof that these claims of conspiracy are like foams on the ocean waves, drifting, indeterminate, and unanchored to any truth. To dig through this data is to excavate nuggets of knowledge upon which one can construct a deeply detailed account of Vincentian electoral history. For example, we know that in 17 elections held during this period, at least 115,000 Vincentians registered to vote. We know they cast 662.529 votes. And we know that in 65 years, only 9,789 ballots were declared as invalid, a tiny 1.47 per cent. Armed with this data we can reach towards a more mathematically informed historical analysis to illuminate the darkness where conspiracies reside…”

“A scientific pathway also exists to determine the truth of the “mutilated ballots” conspiracy. Probability theory instructs that the probability that Central Leeward constituency would achieve error laws greater than the entire country is 1 out of 0. As a real-world phenomenon, it defies mathematical logic Vincentian history offers no basis upon which we can quantify this phenomenon indeed, placed alongside the measurable truths of Vincentian history, the twin conspiracies of the stuffed ballot and the mutilated ballots wither into the muddied mutterings of undisciplined minds.”

What is the effect on the Central Leeward election of this abnormality?

Evidently, when stacked up against the facts stated by Returning Officer Mr. Gaymes himself and the photos of the “mutilated ballots”, Professor Dennie’s mischaracterization of the mutilated ballots as a ‘conspiracy’, suffers from a fundamental untutored error. He ignored acquainting himself with the facts, goes on to set up his own strawman and then proceeded to knock him down with a shower of “erudition”.

However, on the assumption that the Professor can be relied upon to present accurate statistical analysis and that his assessment of how abnormal is the incidence of so many hundreds of ballots being made invalid in an election in a single constituency, even on the admission of the Returning Officer himself, can the election in Central Leeward be considered to have been conducted substantially in accordance with the elections laws and as a consequence was Gaymes’ declaration that Straker won the election valid?

In the final analysis, that is one of the critical issues which the Court must decide. The public awaits the outcome with much interest, especially since the ULP has been hanging on precariously to Government by just this one seat “majority” in the House of Assembly, since the outcome of the December 2015 elections.