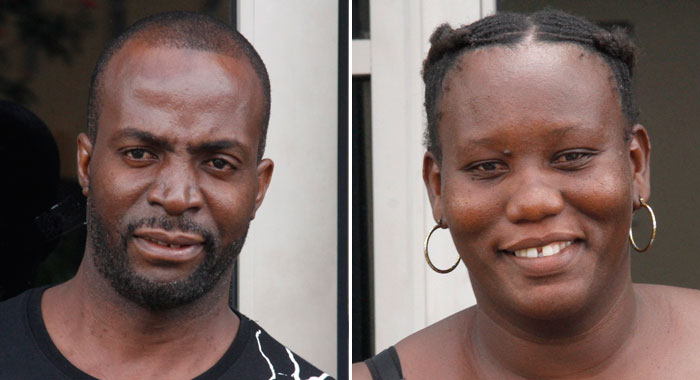 One year after he claimed he was “conned” into self-imposed “house arrest”, the drama surrounding popular promoter Regis “Splectron” Williams continued on Friday at the Kingstown Magistrate’s Court with the hearing of the first of four lawsuits he has brought against his ex-girlfriend, Isha Sam.

“Your honour, I wouldn’t call it a relationship. This woman came into my life with the sole intention of conning me. She is a con artist. That’s what she does,” Williams told Magistrate Bertie Pompey, when asked, at the beginning of the trial on Thursday, if he and Sam had a relationship.

When it was her turn to address the court, Sam sternly denying being a con artist and said she had left Williams several but he kept asking her to continue the relationship.

“I did not come into his life to con him because if I wanted to con him, I would seek to be with him. He is the one who came at me. I never went with him. I left him several times and he came begging back. I didn’t seek him to con him from anything,” Sam, who lives in Chapmans, told the court.

In presenting his case, Williams told the court that he knew Sam from the end of January 2015 to December 2016.

Williams is suing Sam over some items that he said she never returned after borrowing them between April and December 2016, while they lived together at his Paul’s Avenue Apartment.

“She made me had to leave my apartment and left all my belongings behind,” Williams said.

The items, according to Williams, are a light kit, valued US$549 and a Behringer audio mixer, valued US$99. He, however, noted to the court that the prices quoted do not include the cost of shipping and Customs duties.

Williams is also suing over a Panasonic DVD home theatre system valued EC$1,500 — which he later admitted giving to someone else, and a blender he bought in Kingstown for EC$300 in 2008.

Williams told the court that he did not have receipts for the items, saying that he bought them a long time ago.

He, however, showed the court what he said was the manual of the audio mixer.

Williams also said that Sam removed an iPad, valued US$239 — exclusive of shipping and Customs charges.

“This document is something I downloaded off the internet to show the cost of it,” Williams said when asked what document he had to support his case.

He also showed the court a photograph as “proof of it in use on a job I was doing”.

Asked if she had any questions for Williams, Sam said:

“There is a Digicel cell phone as well.”

The magistrate asked Sam why she is saying that there is a cell phone as well but is denying the claim against her.

“Why are you going through with this trial?” Pompey asked the accused woman.

“He gave the home theatre system to a young lady that was assisting him when I used to go on his job. When we broke up, he told—” Sam was saying, when the magistrate cut her off and told her to ask Williams questions to test the evidence he has presented to the court.

“Your honour, this young lady fool me into thinking that somebody was trying to kill me. She told me she had a hit man friend who can—” Williams said.

The magistrate stopped the claimant, telling him to respond to Sam’s claim that he had given the home theatre system to a young lady.

“Why would she be helping you when she basically is the one who would drive me to go to your work? The lady is outside. Don’t come with that,” Sam told Williams.

When he indicated to Sam that she could proceed, she continued giving her story.

But the magistrate again stopped her, telling her that she was not giving evidence at the point, but it was her chance to question her accuser about the evidence he had put to the court.

“Why would I—” Williams interjected and the magistrate immediately told him that he could not question Sam at that point.

“Just like she can’t give evidence now, you can’t ask questions. When she gives her evidence, you can ask questions,” the magistrate told Williams.

Sam then said she had no further questions for Williams.

The magistrate proceeded to ask Williams if he had any witnesses in the matter.

“To prove what, sir?’ Williams said.

“I am asking you if you have any witnesses. This is your case. I don’t know.”

“Sir, this lady —” Williams said and the magistrate immediately stopped him.

“I am asking you if you have any witnesses. Yes or no?

Williams then said she had no witnesses, and the magistrate told the court orderly to administer the oath to the defendant.

Given a chance to tell her side of the story, Sam immediately denied entering Williams’ life with untoward intentions and said he was the one who pursued her.

Sam, who did hair and nails, told the court that she left where she was working and started to work with Williams.

“When he took me to his business place, because he told me to come and work with him,” she said adding that Williams said that she could help him and do her work at his office also.

She said that when she joined Williams’ staff, he told the other employee that she was now her supervisor.

The defendant told the court that there was a young lady, Minelva “Kimmy” Stapleton, who was working with Williams who would drive her to the various places where they did photography and videography jobs.

Sam said she cannot recall what Williams called his business then, but he has since renamed it.

“Basically, I was doing everything,” she said when asked what was her job title.

Sam told the court that she was at work one day when Williams called her from Spring Estate in Argyle telling her that his cell phone fell and the screen went blank.

She, however, told the court that she cannot recall when that incident occurred.

After she failed to obtain a screen at several places in Kingstown, Sam said she asked Williams why not take the phone back to telecommunications provider, Digicel, where it had been purchased.

She told the court that Williams had told her that he used to do a job and the person he was working for paying for the cell phone.

When the gig ended, Williams was supposed to return the cell phone and he went and changed it over to his name and was not paying any bill for almost a year, Sam said.

She said Williams told her if she took the phone to Digicel, the company would have confiscated it.

“The phone was in his office. Nobody couldn’t even use the phone because the screen was blank,” Sam said, noting that the phone had a post-paid account.

She said that while Williams claims that he lent her the light kit, she doesn’t have any business doing on her own, but works for Williams

“He was the one who gave me the light kit. He never lent me anything. He is only here today because he wants to be spiteful.”

Williams gave Stapleton, another employee, the theatre system and called back for it when he and Sam broke up, the defendant told the court.

She said that she asked an ex-police officer, Cosmos George, one of Williams’ former employees, to collect the theatre system from Stapleton and give it back to Williams.

After plugging up the theatre system, Williams said it was not working and demanded payment, Sam told the court.

In explaining what had happened to the iPad, Sam said that soon after starting to work for Williams, Vinlec had disconnected his electricity for non-payment on a Friday.

She said he had written the electricity company a cheque and she had asked why he had done that, knowing that there had not been any money in the account.

Sam told the court that Williams had told her that she does not understand how those things operate, adding that the cheque would not be processed until the following Monday, by which time he would have made a deposit.

“He came by me looking for some money to pay for the light,” Sam said, and Williams looked at her.

“Forget about him. You are speaking to me,” the magistrate told the woman.

Sam said that she had to get an order from the court to get from Vinlec the documents that would support what she was telling the court.

Continuing the story about the electricity, Sam told the court that she went to Vinlec, where she was told that monies have to be paid before the electricity is reconnected.

“He send me by CashWiz. First, it was the same mixer that he was talking about. CashWiz said to me that they cannot loan me the money on the mixer because they don’t normally get those things sold very quickly. That’s when he gave me the tablet to carry.”

Sam explained to the court that if a debtor doesn’t repay CashWiz as agreed, the company would sell the item being held as security.

After noting the woman’s comment, the magistrate said that the matter needs a whole day to be ventilated.

He noted that he had not even gotten to the second claim and said he would adjourn the matter until Jan. 25, 2018.

He further suggested that the parties get counsel to help them to present their cases to the court.

As Williams was leaving the court building, he passed Sam in the waiting area where Sam was seated with several persons, one of whom was holding her new-born baby.

“I will get a lawyer for you,” Williams told Sam.

One reply on “Drama as promoter takes ex-girlfriend to court”