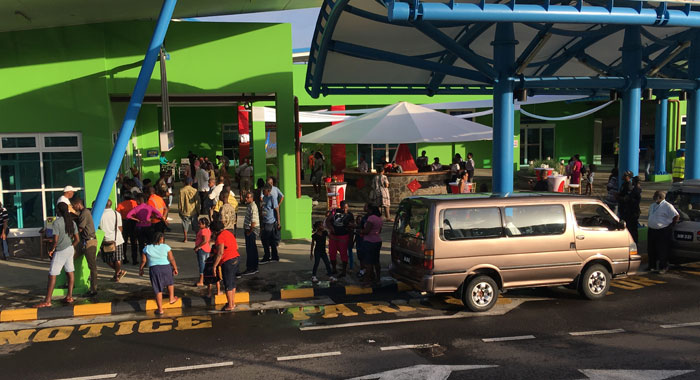 A taxi driver waits for fares as passengers wait for transportation outside Argyle International Airport after the inaugural Air Canada Rouge flight on Thursday. (iWN photo)

While there was much celebration at the Argyle International Airport on Thursday with the historic landing of Air Canada Rouge’s inaugural flight from Toronto, one group of service providers saw very little direct benefit from the flight: taxi drivers.

Tourism officials say that the 138-seater aircraft arrived and left the destination full but Kingsley DeFreitas, a popular taxi driver, said that only three of this colleagues picked up fares from passengers on the flight.

“The development, so far, is relatively good. I heard from the Minister of Tourism and the CEO of the Tourism Authority speaking gloriously about this.

“I didn’t get any jobs from the flight that came from Canada directly today,” said DeFreitas, who is also a social commentator.

He said there were still six or seven taxis ahead of him in the queue when he spoke to iWitness News around 6 p.m., 90 minutes after the flight landed.

DeFreitas said he knows about three or four taxi drivers had persons call ahead and pre-book their services.

“But the ones in line are still in line,” he said.

“We, in the line, are still waiting on the LIAT [flight] 737 that we depend on every day, so we will get some business from that particular flight.”

The Air Canada Rouge flight was the first scheduled international non-stop flight to the EC$700 million Argyle International Airport since it began operating on Feb. 14, 2017, six years behind schedule and 100 per cent over budget.

Tourism officials have not released data on the demographics of passengers on the flight, but our observation suggests that many of them were returning Vincentians, including a significant number of farm workers.

The Air Canada Rouge flight comes at a time when St. Vincent and the Grenadines is expected to see its cruise passenger arrivals double over last year’s figure, partly because of the devastation of hurricanes in other destinations.

The Air Canada Rouge flights are scheduled to continue weekly until April 12, and head of the Tourism Authority, Glen Beache, said his government will continue to hold negotiations and hopes that from next year the flights will move from seasonal to year-round.

Asked if he was optimistic that things are looking up for him as taxi driver, DeFreitas told iWitness News, “Well, the tourism season, so far, is looking relatively well. The yachties and cruise ships, that seems to be going very well.”

In addition to Air Canada Rouge, Sunwing is slated to begin operating chartered flights into St. Vincent on Sunday.

Minister of Tourism Cecil “Ces” McKie told Thursday’s ceremony that all of those flights are fully booked for December.

But DeFreitas was concerned about whether enough traffic will be generated to make the flights self-sufficient.

Meanwhile, another taxi operator, who did not want to be identified in this article told iWitness News that taxi operators have to be skilful in order to survive because there are few opportunities for fares at Argyle.

The operator said that at E.T. Joshua Airport, they could pick up additional fares from hotels in the Villa area or persons going to shop at one of the nearby supermarkets.

But at Argyle, their clientele is almost exclusively air passengers and airport staff.

The operator said that they begin the month with a bill of EC$105 – operations fee –for using the building provided to them, for parking, and cleaning.

Airport officials have approved 50 taxi operators at Argyle International Airport, but the source was not able to determine how many of them are actually operating from the airport.

He said that on average, for the winter season, he would expect five fares a day, but he now gets two or three.

Travellers are also benefitting from the fierce competition for fares, which see taxi operators undercutting each other in an effort to build up a clientele.

“While that is good for the customer, it will run me into the ground if it continues,” the taxi operator said.