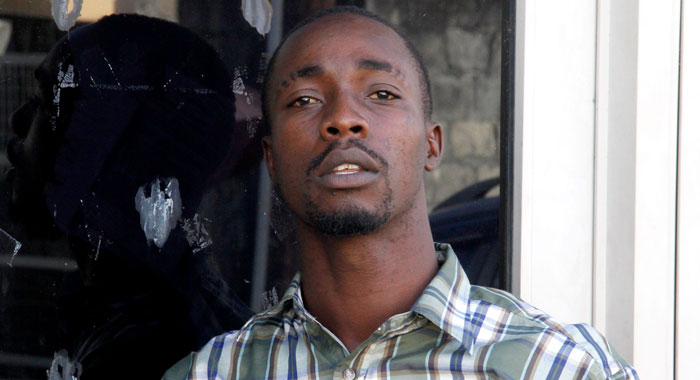 An Ottley Hall man will spend the Christmas holidays in prison then appear before the Serious Offences Court for bail review on Jan. 8, 2018 in connection with his alleged robbery of a school watchman and theft of items from the school’s tuck shop.

Jamal Bobb appeared at the Kingstown Magistrate’s Court on Monday charged that on Dec. 3, 2017, at Stoney Ground, being armed with a gun and a knife, he robbed Tex Thomas of Diamonds of one black Alcatel cellular phone — value EC$220, one battery pack — value EC$120, one silver chain value EC$100, one small fan — value EC$55, one white and black Nike slippers — value EC$150, and EC$300 in cash –total value -EC$945, the property of Tex Thomas of Diamond, and at the time of so doing and in order to do so, put Thomas in fear of being then and there subjected to force.

The accused man was not required to plead to the indictable charge.

Bobb was further charged that on the same date and place, he entered the Stoney Ground (Kingstown) Government School Tuck Shop as a trespasser and stole a quantity of snacks and soft drinks, value EC$518, the property of Allan Hanson of Largo Height.

Prosecutor Sergeant of Police Cornelius Tittle objected to bail, telling the court that investigations are on-going.

He said that it is feared that if released on bail, the accused man would interfere with the investigations.