NDP ‘obligated’ to see petitions ‘to their final conclusion’ 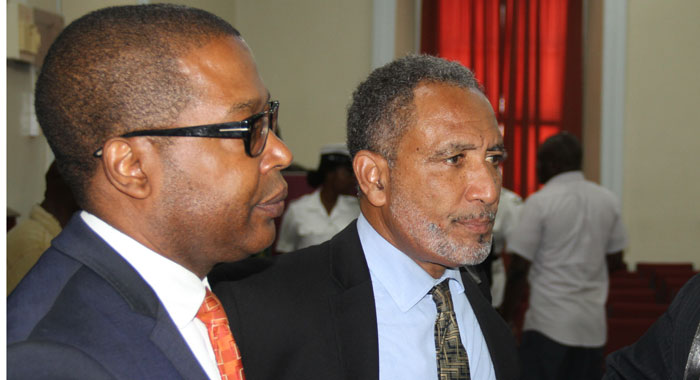 The Leader of the Opposition says that his New Democratic Party has a duty and obligation to pursue the two election petitions that are still before the court two years after the December 2015 general elections.

“Just remember how it was in December of 2015. After the election, the people felt that something was wrong. I was out on the streets of Kingstown and people were angry and we told them, yes, come out, express yourself, do it peacefully, because that is the way that we do things in St. Vincent and the Grenadines — not just in the NDP, and have your confidence in the leadership of the party that we will take up the matter,” Godwin Friday told Vincentians at a town hall meeting in Brooklyn on Sunday.

The NDP has filed petitions challenging the results in North Windward and Central Leeward, two of the seats that electoral officials say the Unity Labour Party won in its 8-7 victory to remain in office for a fourth consecutive term.

The NDP, then under the leadership of Arnhim Eustace, took the decision to go to court over the matters.

Friday said he gives “tremendous credit” to Arnhim, who is Member of Parliament for East Kingstown, “for his courage and his foresight in instigating these petitions”.

The opposition traced the history of the petitions, including the fact that Justice Brian Cottle had dismissed them as improperly filed in July of 2016.

“And everybody said,’Yo’ see the NDP, ah tell alyo’ they just have sour grapes. No issue to deal with,” Friday said of the judge’s decision, which the Court of Appeal later overturned.

“But we felt that justice had not been done,” he said, noting that the party appealed the decision and the court ruled in their favour and reinstated the petitions.

“The next big hurdle was to go to a new judge, essentially to litigate the same arguments that had been made to a previous judge,” he said regarding the government’s application to have the petitions thrown out.

“And people are important because this is not a petition where you have a situation where you have 12 seats and three and you are fighting over one to see if you get four and 11. This is 8-7. You change one, you change government. The importance of this is that right now in St. Vincent and the Grenadines, we don’t know if the government that has been governing over the last two years is legitimately elected. We don’t believe it is,” Friday said.

Friday said that the problem is that for a democracy, that situation cannot continue for such a long period of time.

“We have to have and we must insist on it… We have no choice, it is our obligation, it is our duty not just to the two petitioners but to all the people in St. Vincent and the Grenadines, even those who think we shouldn’t bring it,” Friday told the town hall meeting.

“It is our duty because we know what is required by law, we know what the evidence is, we have proper legal advice. It is our obligation to take those matters to their final conclusion.

“So I don’t have any apology to make to anybody. I believe what we are doing is we are following the law; we are making sure that we guarantee the integrity of our electoral system.

“This is why this is important. This is why we will continue to do it, even with the delays, even if it takes long, which it has, we must pursue it to the very end and we are doing it on behalf of all of the people of St. Vincent and the Grenadines, and we ask you to continue to take a keep [an] interest in it, to raise your voices, to continue to support, to ask questions of your relatives and friend at home and find out how it is going and to encourage them to stay the course,” the opposition leader said.

Last week, the court heard arguments on the application by the NDP to inspect ballots and other documents used in Central Leeward in the December 2015 vote.

The government has objected to the motion and Justice Esco Henry will give her decision in January or February of 2018.