Politicians must stop pretending to know everything — Friday 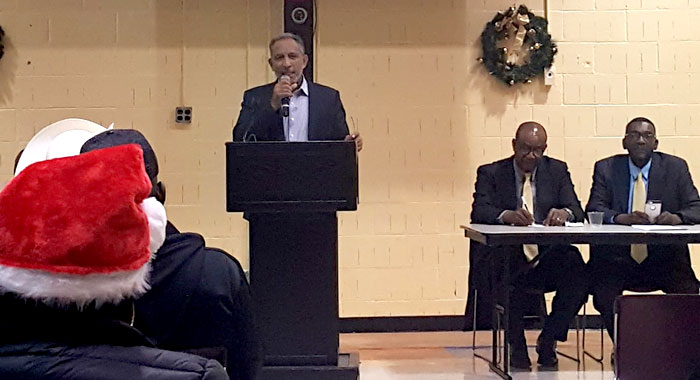 Leader of the Opposition Godwin Friday has told Vincentians in New York that politicians at home must admit that they don’t know everything.

He made the point at a town hall meeting in Brooklyn on Sunday as he briefed the audience on his approach since becoming president of the New Democratic Party and Leader of the opposition in St. Vincent and the Grenadines in November 2016.

Friday, who has been Member of Parliament for the Northern Grenadines since 2001, said there is a notion in SVG and the Caribbean that one has “to be a certain way to be a politician; that you have to be a certain way for people to look up to you.

He said that he seeks to care for people and understand people.

Friday said this is why he said at his acceptance speech when he became NDP leader that he was going to go across the country to get to know people better and for them to get to know him.

“Some people in the ULP (Unity Labour Party) say, ‘Look at Friday, they elect him leader of the party, he doesn’t even know St. Vincent. He say he going now to find out about St. Vincent’,” Friday said and laughed.

“Now, I tell you what, when I started doing it, they start to follow suit. You see, there is no way you can be a good representative if you don’t know what people want you to represent them about. How you’re going to know how to represent somebody if they don’t tell you this is what I care about.”

The opposition leader said he knows it is difficult to be able to go out to the entire country and meet everyone.

“But people don’t expect you to meet all of them. What they want to see is that you are trying,” Friday said, adding that that NDP politicians conduct walkabouts in their constituencies, sometimes twice a week.

“And we meet people and we talk to them about what we see as a future for St. Vincent. But, more, importantly, we listen. And I think that that connection is what is having the people in the ULP going crazy now and all of them going out and try to copy what we are doing.”

Friday said that the important thing for him is to provide effective service.

“But I think you have to have some humility to accept that you don’t know everything. And if we have 110,000 people in St. Vincent and the Grenadines — I say that’s on a good day, why should I feel that I have all the answers? I would like to think that we can work together to build a better country for all of us.”

He said sometimes he gets into trouble with his constituents in the Northern Grenadines “because I do not distinguish on who people vote for.

“I am a representative, I represent my entire constituency and my decisions to assist are based on two things: one, need, and the other, resources. The first one, there is a lot of it, and the second one, very little.”

Friday said that he believes that vibrant political parties, a free and inquiring press, and strong civic organisations are important for democracies.

“In St. Vincent and the Grenadines, it has come down, essentially, to political parties. If there is a problem on the worksite, they call the NDP, if something happening in Kingstown, they call the NDP. Now, I am quite happy for us to play our role in the development of the country, but it takes all of us. And so we have to engage in this full-court press approach in everything we do to try and make St. Vincent better for all of us. That is what we’re endeavouring to do in the New Democratic Party,” the opposition leader said.

2 replies on “Politicians must stop pretending to know everything — Friday”